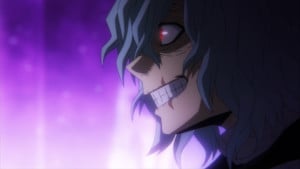 It's safe to say that Season Five has been contentious among MHA fans, especially in how they've decided to rearrange material. I've mostly been fine with it – I'm rarely one beholden to source material as scripture in the first place – but this is the last straw. I was fine with an anime-original episode to promote the movie. I was less fine with skipping a week because of the Olympics, but I could handle it. But this? Canceling the series with a month and a half left in the season? This is too far. And the show they've decided to replace it with is just such an obvious copycat. Just look at that logo! Somebody at BONES really screwed the pooch here!

So yes, the days of MHA are over, to potentially return in another season later. Now, it's time for My Villain Academia, starring not a plucky teenage boy, but a miserable and misanthropic 20-something who really needs to learn how to moisturize. It's been a surprisingly long time since we last saw the League of Villains all together, and the burning question simmering in the shadows of the previous arc was just what the hell they'd been up to in the months after Overhaul was taken down. How did this motley crew of a half-dozen weirdos living in squalor become higher-ups in a heretofore unknown group of Quirk revolutionaries, seemingly poised to overthrow all of Japan in mere months?

The whole answer to that question is still up in the air, but we do start to get an idea by the episode's end. Before that, though, we have to turn back the clock even further, to just after the Overhaul Arc. Remember that big guy Gran Torino encountered way back in Season Four? After blowing a hole through a mountain – and leaving Kurogiri to be captured – he apparently made a B-line to Shigaraki's whereabouts to call him a wimp and beat the crap out of him. As we learn from a house call from AFO's mysterious doctor pal, Gigantomachia is actually the former mastermind's most devoted servant, and for that very reason, he can't accept his master's pupil as the successor to the throne of villainy. Really, can you blame him? Shigaraki is threatening on an individual level, certainly, but his immature gamer metaphors and directionless anger have never screamed Evil Overlord. He's far more Revenge of the Sith Anakin than anything approaching a true Darth Vader.

Though that seems to be intentional, both on the part of the show and AFO himself. Shigaraki's past before being taken in by his “Master” is a mystery to us, and it would seem to be the same for him. There's something dark hiding in his fragmented memories, and his tiny flashback insists his Quirk went wild and killed his family, but the exact details and circumstances around that moment are still obscure. Thus our burgeoning villain has been raised not with a defining ideology or a concrete goal, but to follow his immediate impulse for destruction above all else. That, combined with his quirk, certainly makes Shigaraki dangerous, but five seasons in he still doesn't feel like the kind of manipulative, stalwart existential threat that AFO has embodied since he was first revealed. Everyone's had time to notice that, and so Shigaraki is put to a very literal test – find a way to defeat the unstoppable Gigantomachia, earn the goliath's subservience, and Dr. Feel Bad will help him become a real villain on par with his teacher.

There's also a bit of plot tidying-up in all this that is interesting in an “oh, so that's what that was” way. Remember how Dabi was the only League member involved with the High-End Nomu attack? Turns out he chose to skip Shigaraki's months-long training arc and wound up drafted into a My Villain Unpaid Internship with the Doctor, all while playing his game of dueling bluff-checks with Hawks. That's less a critical detail than it is just some interesting demonstration of the chronology we should probably expect from this arc. If it's one extended flashback filling in the Villains' side of the world, then we'll (hopefully) be getting more connective tissue for the rest of this arc.

For instance, we finally find out just who the Meta Liberation Army really are – and they're not some new movement coming out of the woodwork. Much like the Yakuza in S4, they're a revival of an old power from before All Might's days, but unlike the mob have managed to do a lot more in the shadows. We already knew they had pro heroes among their ranks, but leader Re-Destro casually reveals they've got more than just muscle at their disposal. I have no idea what business Feel Good Inc. is in besides being one of the best pop songs of the 2000s, but their other headliners are a political party leader and a titanic publishing mogul responsible for re-releasing the MLA's manifesto onto the world. This may be a super-powered society, but institutional power is still a big deal when the goal is to change society at its core, and compared to these guys the League of Villains look like grandstanding chumps.

Which is what prompts a second person in this episode to call Shigaraki a two-bit punk who isn't fit for his position, with Re-Destro forcing the League into an immediate showdown. Their ranks are already well prepared to overthrow society from the inside, so what better way to kick off their inauguration than to crush AFO's ramshackle pretenders? This leaves Shigaraki and co stuck between a rock and a hard place, but in perhaps his first real show of cunning in the series, Tomura devises a plan to use said hard place to soften up that rock. Though there are also some growing doubts among some of Shigaraki's immediate underlings, as both Toga and later Spinner question whether what's going on now is really what they signed up for. Tomura has been so directionless since leaving his master's care that he's very much at risk to lose everything he's been given, and this battle with the MLA is going to decide if he can make his dark, vague dreams of destruction a reality.

So the stage is set for what promises to be an explosive confrontation, and it's likely to only get heavier from here. We may know vaguely how this ends, but the journey there is one giant question mark, likely to be fleshed out in these closing episodes, and I'm excited to see it all go down. The villains comprise some of my favorite characters in MHA just from what little screentime they've had, so the chance to see a full story about them is about all I could ask for.