My Next Life as a Villainess: The School Play Is a Battleground for Very Real Feelings

When Katarina Claes is reborn in the Fortune Lover otome game, it's her mission to make the main characters happy and avoid reaching any of the original game's bad endings. Katarina succeeded in reshaping all her friend's love lives in the first season, but she did it a little too well. Now, in Season 2, everyone loves her instead.

The initial goal in My Next Life as a Villainess was to keep anyone from falling in love with the original heroine, Maria Campbell. While that plan came to fruition, Katarina is now ill-equipped to handle her own widespread group of friends. And in Episode 2, everyone's feelings come to a head in the middle of the school festival.

When Katarina Is Roped Into A Stage Production With Her Friends

Katarina has been a good friend and ally to everyone around her and they all fell in love with her in return, boys and girls alike. Now her original fiance, Geordo Stuart, has more than a little competition -- even Katarina's foster brother Keith -- and the group comes to a boiling point again. The gang is all involved in Sophia Ascart's stage play, which is effectively Cinderella, but the actress for the wicked stepsister can't make it. Due to Katarina's incredible influence and popularity, everyone is eager to have her assume the role, and she has no choice but to accept.

This shows that while Katarina is a deft but benign manipulator, especially with prior knowledge of Fortune Lover's original plot, she isn't always prepared for the consequences. Katarina can be a sloppy villainess/heroine, creating as many problems as she solves, and now she's being pushed into a role she wasn't ready for.  She's done zero preparation for the wicked stepsister role, but also has no means of refusing her friends' offer. Fortunately, though, she has the adoring Mary Hunt to assist her.

Her Freinds Squabble Over Both Versions Of Katarina 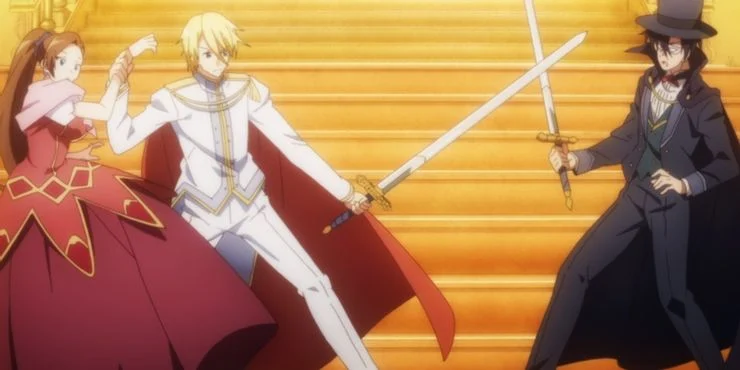 Katarina gets in trouble when she misplaces her cue cards, but fortunately, she's able to draw upon Fortune Lover's original Katarina Claes for reference while playing the wicked stepsister. It works wonderfully, and Maria Campbell's character, Marianne, reacts accordingly.

In the next scene, a masked villain (played by Nicol Ascart) crashes the evening ball with a sword in hand and takes the wicked stepsister hostage to claim the castle's riches for himself. However, Geordo can't stand seeing Nicol so close to Katarina, so he challenges the villain character to a duel while quietly urging Nicol to move further away from her. Geordo's possessive side is out in full force, even if it's just for a play. Keith also gets possessive, and his villager character wanders into the scene (against the script) just to place himself between Katarina and Nicol. He even brandishes a rake as a cheap sword to fight Geordo's and Nicol's characters, determined to win Katarina for himself.

The messy scene is finally resolved when Katarina announces that Nicol's character was hired to help draw out Geordo's protective side and prove how close their bond is, a twist that's loudly applauded by the audience. Still, Geordo, Nicol and Keith simmer with resentment toward one another, and Mary chides them for getting carried away.

For now, it's amusing to see Katarina's friends blur the line between stage plays and their real feelings, but it proves just how influential and beloved Katarina is in My Next Life as a Villainess. There's little doubt this loyal group of friends will strike again, especially in light of the shadowy stalker making his move on Katarina. They may even unite into a rescue squad if that turns out to be what she needs. Katarina has forged herself a team of superheroes without even realizing it.