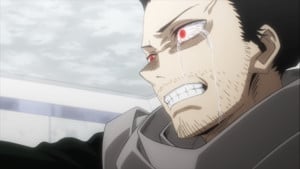 It took an extra week thanks to the Olympics, but we're back! And with the Todoroki family drama concluded (for now, anyway) it's at last time for MHA to dive back into the fun, super-powered fantasy of...confronting intense personal trauma and half a lifetime's worth of survivor's guilt. Well then.

To be fair, we do get a tiny morsel of normal school life, even if it's just Class 1-A getting suited up for another training exercise, and any episode featuring All Might's painfully forced puns can't be all that depressing, especially when he keeps repeating them until somebody laughs. But after that, this episode focuses its sights solely on Shota “Eraserhead” Aizawa, and uncovering a secret he's kept buried for the entire show. What follows is a story I'm still of two minds on, as it represents an unusually messy and awkward moment in MHA's ongoing narrative, even as its execution goes above and beyond.

Simply put, it's a really weird decision to suddenly dredge up Aizawa's past and center a lengthy and intensely emotional moment around a character we've only ever gotten the barest hint even existed. And that's the anime, where there was at least a near-invisible easter egg back in the second ED sequence in Season Four. In the manga you'd have no prior clue about anything brought up here unless you'd read the My Hero Academia: Vigilantes manga, which for some reason spends a few chapters detailing Aizawa's school days leading up to Shirakumo's death. Without that context though, it's pretty strange to see two characters we've known for ages making loud, heartrending declarations over somebody we've never heard of before now. It's a very questionable decision in a moment where the anime's narrative is currently in flux, and not a move I'm a fan of in either medium.

That all being said, even if I couldn't tell Shirakumo from Adam, I am invested in Aizawa. He's been one of my favorite characters since he was first introduced, largely thanks to his stonefaced realism clashing so hard with the bright and inspiring idealism of the rest of the cast. More importantly, while other UA teachers have certainly instilled important lessons and ideas into their students, Aizawa in particular has always been adamant about keeping these kids from destroying themselves in pursuit of their dreams, going all the way back to his first lesson with Deku in season one. Nobody, not even All Might, takes their duty to raise these kids as seriously as Aizawa, and it's here we learn why.

He's seen firsthand the harsh, uncaring danger that awaits his students in even the best of times, and knows that most of them are too blinded by the flash and excitement of emulating the heroes they've grown up idolizing to notice. So he's taken it upon himself to show them just what thoughtless altruism will get them, and make damn sure they know the difference between self-sacrifice and throwing your life away. (Sidenote: Deku probably needs some remedial lessons on that one, Eraserhead.) The reveal that he actually re-enrolled the previous class he apparently expelled the previous year is a callback I never expected to come back, and it hammers home the compassion that's always been present behind Aizawa's cold and rational exterior.

So even as Shirakumo himself feels more like a plot device than a character, the act of watching Aizawa dredge up all those emotions in real time truly does pull at my heartstrings. I especially love the different ways he and Present Mic react to the whole affair. Aizawa's impatient and confrontational, almost resentful at having to entertain what he wants to believe is all a sick misunderstanding. Mic is pure deflection, acting as if the whole thing's a bad joke and he's waiting for the punchline, all while visually shaking even as he tries to rein in Aizawa's anger. Neither of these characters have had much onscreen time to bond, but their interactions are written so well that they really do feel like old friends trying to keep each other together through an emotionally devastating situation. This is another episode of MHA that proves it can carry itself without a hint of action, and I can absolutely appreciate that. I can also appreciate the small glimpses we get of Teen Aizawa in all his gangly, anti-social glory. Be careful who you call ugly in high school everyone – some people eventually grow into the scruffy, exhausted hottie look.

Then there's what this whole trip down memory lane accomplishes. For a few scant seconds, whatever remnants of Shirakumo lingering inside Kurogiri break through to deliver a single word: “hospital.” It's not clear exactly what that means to the still secret ongoings of the Meta Liberation Army, due in no small part to that entire plotline kind of disappearing for the last few episodes. But it's enough info that Hawks decides he needs to start acting, and the show gives us a glimpse of All For One's mysterious doctor co-conspirator. It would appear that whatever experiments he's been pulling to create the Nomu across this whole show have reached their zenith with Tomura Shigaraki. The exact picture of how this came to be is still unclear, but the future implications are obvious: shit is about to go down in a big way, and Aizawa might just be about to see a lot more young heroes cut down well before their time.

This all makes for a discombobulated episode in the end. There are absolutely strong moments, with striking and human emotions mixed into individual scenes, but the actual episode feels like it's straining at the seams to connect its surrounding story beats. Part of that is undeniably due to how this season has chosen to adapt this stretch of its source material, but it's also just an awkward and nebulous spot in the overarching narrative of MHA. With the final quarter of this season left, here's hoping the show can manage to center itself.