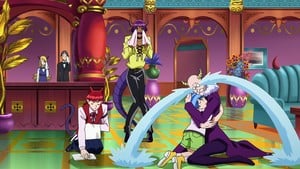 There are several important takeaways from this episode, which marks the end of the Walter Park arc. The first is, of course, that no one looks remotely intimidating wearing the official uniform of the Six Fingers and whatever evil over-organization they belong to. Half a military coat is not a good look – it's like Scissors Demon Alis Alis has been there. Second is that I somehow missed that Clara still had Connor and Murf on her feet, just as stylish ballet flats rather than slippers. And there's the fact that Balam and Kalego appear to be sharing a room in the hotel, one with what appears to be a lone double bed. But of course the most important thing is this: Ameri finally works up the courage to ask Iruma out – and he accepts.

That entire scene is one of the strongest in the episode from a visual standpoint – the way the lights shine against the dark, Ameri's body language as she tries to convince herself that she can do this, and the fact that even standing on a box, Iruma still only comes up to Ameri's chest are all just really well-drawn. From a story perspective, though, this is definitely one of the season's most important moments. Ameri has been wrestling with her feelings for Iruma since sometime back in season one, and she's also gotten some really questionable advice from shoujo manga. But mostly she's been struggling to understand that she has those feelings in the first place. Iruma's definitely her first crush, and while he's absolutely adorable, she also may not have expected someone like him to have been the person she'd be attracted to. Probably the biggest hurdle for Ameri, though, is the idea that someone as strong as she is, to whom strength and discipline are so important, should not give in to softer emotions like love. Liking Iruma forces her to reevaluate herself, and while we know that there's nothing weak or wrong about loving someone, it's been a long road for her to stumble along. She's not fully there yet, either – when Iruma (who may not even realize he's been asked on a date) accepts her proposal for them to go somewhere just the two of them, Ameri faints dead right away. But it's still progress!

In terms of wrapping up the Walter Park storyline, things are a mix of anti-climactic and just about right. Kiriwo of course escapes, revealing his true colors to his erstwhile inmate allies, and he may be just a little too excited to see Iruma's been involved in the foiling of his brother's plans – that heavy breathing that at first said “panic attack” to me was, uh, likely something else. If anything, seeing Iruma and learning that he stopped the park's destruction is a great motivating force for Kiriwo. He's clearly not thrilled with his brother's plans, but the idea that he can go up against the one person who spelled defeat for him in season one has him reacting like Clara in the chocolate fountain: unhealthily excited. He just walks off in the end, stupid jacket flapping in the breeze, but his exit from the scene is likely to be very brief.

Meanwhile Ronove's dad, Roosevelt, is only too happy to fête his money-maker's saviors, which is a definite double-edged sword. Yes, they deserve the praise and parade and all of that, but letting Roosevelt and Sullivan go on TV to scream their children's praises results in a predictable onslaught of media. Since this means that at least Iruma and Asmodeus are headed to Chez Clara, I'm willing to overlook the proud parents' lack of foresight, because that is going to be good. Seeing how attached Sullivan is to his grandson is also a lovely thing; no matter how often we're reminded of it, it makes it clear how adored Iruma finally is, and since he was reminiscing about how he no longer thought anything of being in danger after the life his parents forced him to live before, it's doubly sweet that Sullivan is so distraught by the perils Iruma faced.

It isn't every show that has a central character who is universally loved with such good reason. Iruma's got a personality and a past rather than being a milquetoast of a blank-slate hero, and everyone is fond of him for who he genuinely is. All the dumb-looking evil henchmen uniforms in the world can't dim those moments this week, especially when they come from Kalego in his fluffy form.