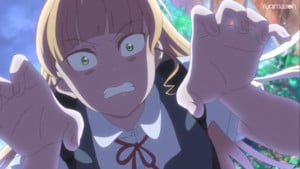 I've long believed that if you're going to make an idol group, you need at least one of them to be an asshole to get the most out of your group of cute girls and/or boys. Having a jerk, even one with the corners sanded down, just offers a lot more opportunities for comedy and engaging dialogue, and it's a big factor in what's often made Love Live! such a success. µ's wouldn't be the same without Nico Yazawa and her spiteful, undying devotion to achieving Idol Success, and whilst Aquors did alright with subbing in an offbeat weirdo with Yohane, it's nice to see Superstar!! going back to tradition. Keke and Kanon may be passionately pursuing their musical dreams, but Sumire is here to take the spotlight, by force if necessary.

Right off the bat, “Street Corner Galaxy” represents a notable step up in Superstar's already strong Face Game. There are dozens and dozens of memorable and striking expressions sprinkled throughout this entire episode for just about every character. Sumire of course gets the lion's share – and I especially love the way her eye twitches whenever things stop going her way – but Keke also gets plenty of chances for her School Idol worship to shine strong. This is one of those episodes where you could turn off the subtitles entirely and still be able to read every emotion and plot beat just through the characters' faces or body language. And it's not just for comedy: the sequence of Sumire wordlessly dancing along to KuuKaa's performance, alone in the rain, tells a remarkably somber story for this franchise in just a few seconds. This series has looked good from day one, yet it's still finding little touches to surprise me.

Writing-wise, Sumire is already a strong favorite, though not just because she's the requisite idol gremlin of the unit. She has a surprising amount of depth to her, constantly wanting the spotlight yet forever being cast in bit parts and background roles due to the harsh whims of show business, until she's become simultaneously starved for validation and terrified of failure. So instead of actually going to auditions, she strolls the streets after school hoping to be whisked off her feet by a talent scout – and when that doesn't work out she tries being a big fish in a small pond by joining the newly minted School Idol Club. Yet that too doesn't go as planned when she can't steamroll her way into being Center, so she naturally runs away from the whole affair. In classic Love Live! fashion this is all delivered with plenty of humor (congrats on becoming the first School Idol to commit felony abduction, Sumire!), but there's still a sentimental story here that gets a loving conclusion thanks to Kanon.

Kanon also makes a strong case for why she's our leading lady this go-around. Previous centers were always the energetic, borderline societal menace of the group, but here we get to see the potential of having our main orange girl be the sole responsible one in the club. Now Kanon has to surpass her fears to become a stellar idol and babysit a pair of hyperactive doofuses in the process. On the serious side she's also just much better equipped to relate to Sumire's plight. Kanon knows what it's like to want something, fail, and then spend forever trying to convince yourself you've given up on it. And the solution she comes up with – inviting Sumire to take Center position from her, rather than just offering it – is a great way to support the girl while still encouraging her to grow towards her dream. Props to Chi-chan for the assist, as she continues to be a great wingwoman even as she pretends she hasn't already joined the Idol Club.

Overall this is just a darn solid character intro episode. It fleshes out Sumire while assuring us she's a comedy goldmine, effortlessly establishes an infectious group rapport, all while making a great case for Superstar's reduced cast size. It's plain old Idol Fundamentals delivered with extra visual panache, and has me looking forward to whatever nonsense these girls get up to next.