The fifth match of My Hero Academia's Joint Training Arc was highly eventful, to put it mildly. Chief among the developments was Ochaco Uraraka taking the opportunity to remind everyone who is Best Girl. The audience has bestowed this crown upon the aspiring hero for being MHA's best female character. Both the series and Deku himself would be lost without her.

Ochaco has come a long way during her time attending U.A. Initially aspiring to be a hero to earn money for her family, she's developed a genuine desire to help people after being inspired by Deku's dedication. Her Quirk, Zero Gravity, allows things she touches to become weightless until she brings her fingers together again. While not overly useful in combat, this ability is perfect for saving people and restraining villains.

As seen in the fifth match, Ochaco does not rely solely on her Quirk, using her Gun Head martial arts training and quick thinking to repeatedly save her teammates. When Deku lost control of his new Quirk, he started panicking while his opponent Hitoshi Shinso simply froze. It was Ochaco who rushed to the scene and quickly took control of the situation by ordering Shota Aizawa's apprentice to stop Deku with his mind-controlling Quirk.

Neito Monoma, not one to let an opportunity to defeat Class 1-A pass him by, quickly attacked once Ochaco had safely floated Deku back to the ground. Already accustomed to the drama that follows his mysterious Quirk, she was immediately back in battle mode. When Monoma copied One For All, Deku -- for the second time in less than five minutes -- panicked while Ochaco took care of business. Using her martial arts skills, she instantly defeated and captured the dangerous Quirk-copier of Class 1-B.

As she escorts Monoma to jail, she displays her intelligence and poise once again by, unlike Deku, refusing to be baited by the trash-talker. Ochaco treats him cautiously, knowing how many Quirks he can copy and for how long, though she is surprised to hear he has improved. In her defining character moment of the match, she refuses to let her personal feelings get in the way when she realizes Monoma has left a trap for Deku. Instead of rushing to help her crush, Ochaco goes where she is needed most -- to support her other teammates.

Aizawa should have given her a backpack because Ochaco carried her team the entire match. Once she arrives on the scene, she quickly disables two more opponents with excellent combat skills and more quick thinking. Responsible for three of her team's five captures, she simply willed them to perfection. Showing progress on par with Katsuki Bakugo's brilliant performance in his own match, Ochaco is becoming a force to be reckoned with.

When all is said and done, Ochaco does not bask in success or stress over Deku's close call. Instead, she reflects upon her own performance, understanding that even though she was successful in saving him, she still acted recklessly. She doesn't regret stepping in but acknowledges that there's always room for improvement. Even her stoic teacher offers praise for how mature she has become.

This breakout performance should finally move her character from someone who seeks inspiration to someone who is an inspiration. In a class full of prodigies and eccentric personalities, it's tough for the normal-by-comparison Ochaco to feel like she has any business being there. Just because she hasn’t been kidnapped, overcome an abusive parent, or been named the chosen one in the fight between good and evil doesn't devalue her own hard work. Her journey to become a hero's hero is only just beginning in My Hero Academia. 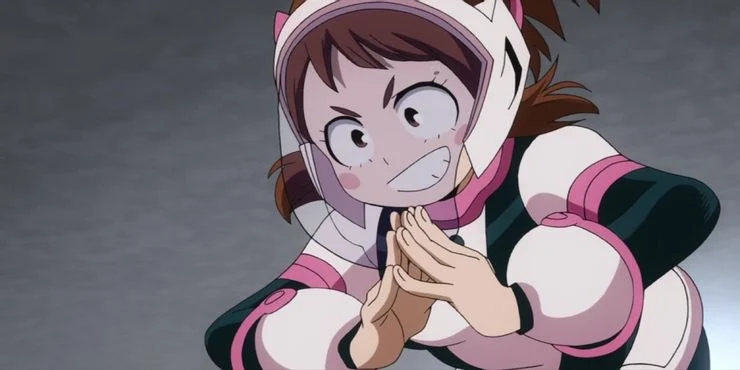