Sentai Filmworks announced on Tuesday and last week that it has licensed the two-episode Escha Chron and three-part Ane Log original video anime (OVA). The company will release the OVAs on home video and on select digital outlets.

Escha and Chron are as different as night and day, but together they eke out a life in the colorless world of Terminal, a post-apocalyptic wasteland in the far-flung future. Their monochromatic lifestyle changes, however, when they arrive in the present-day Transit, where color and music abound. There they encounter new sights and sounds unlike anything they've seen before, and with each new experience, their home world of Terminal gradually begins to change. 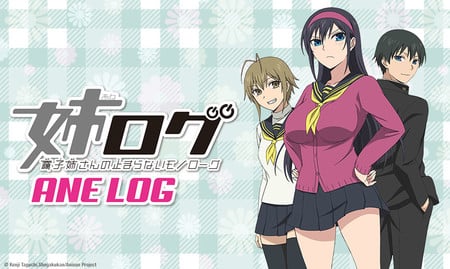 Kids say the darndest things, and in Moyako's opinion, her brother says the strangest things of all! An innocent childhood declaration that he'd one day marry her has convinced Moyako that her brother will grow up to be a total perv, and now she reads the worst into their every interaction. Surely it's a big sister's job to rehabilitate her little brother, right? Only Moyako might not be up to the task, because she's the one turning otherwise innocent situations into perverted scenarios!

Thanks to DokoMadeMo for the news tip.