My Hero Academia: How Strong Could Ochaco REALLY Be With Zero Gravity?

My Hero Academia's lead heroine, Ochaco Uraraka, is a popular character thanks to her kind spirit and devotion to helping her parents escape from poverty. She's a good person at heart and will make a great Pro Hero someday, no matter how skilled she becomes in battle compared to the likes of Izuku Midoriya or Shoto Todoroki. Her all-purpose Quirk makes her particularly well-suited for rescue work, since Zero Gravity is useful for clearing rubble or lowering civilians to safety.

Despite Ochaco's potential as a rescue hero, her Quirk has a huge amount of unexplored combat utility. Considering My Hero Academia is a battle shonen, the relevancy of a character is often directly tied to their ability to contribute to fights, and Ochaco's focus on rescue rather than combat means she's usually relegated to the sidelines. Here's why, if she exploited the combat applications of Zero Gravity, she would become a more relevant character -- and potentially one of Class 1-A's most formidable fighters.

The key behind Ochaco's combat potential is her ability to alter the effect of gravity on objects she touches, allowing her to move massive objects at speeds that would otherwise be impossible for a human. This is best demonstrated in the Heroes vs. Villains combat simulation in Season 1 of My Hero Academia, when she uses her Quirk on a building column to swing it with wall-shattering force. Unfortunately we don't see Ochaco use her Quirk this way again, as in later seasons she focuses instead on getting in close to opponents to make them float.

Force increases depending on both the mass and acceleration of an object. Ochaco can wield objects of incredible mass and effortlessly accelerate them to high velocities, resulting in blows with devastating levels of force. She's one of the few anime characters for whom it actually make sense to wield a massive buster sword. However, because Pro Heroes don't typically carry around weapons, she must find other ways to take advantage of the force she can pack into heavy objects. Ochaco could wear a heavily armored costume -- similar to Tenya Iida's -- and then use her Quirk on it so she could land armored punches at high speeds. Failing that, improvised weapons such as vehicles and rubble would work. 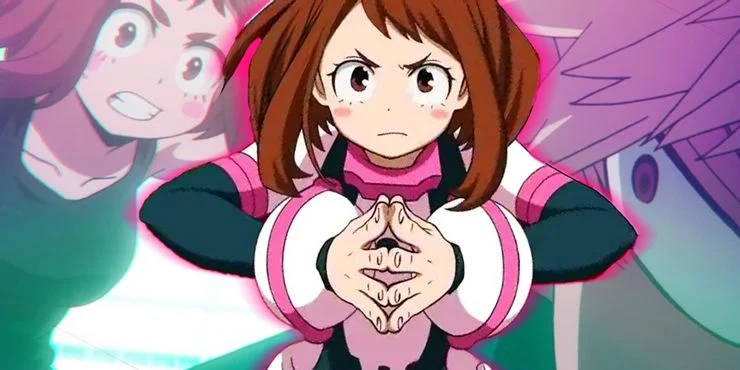 Zero Gravity doesn't just give Ochaco attack power, however -- it also enhances her mobility. Reducing her own weight should allow her to make leaps similar to those seen by humans on the moon. There's no reason she couldn't rocket around at superhuman speeds given enough practice, and with enough dedication she could potentially rival Gran Torino. This mobility, combined with the ability to strike opponents hard, would make her a force to be reckoned with on the battlefield.

Ultimately, it's not Ochaco's Quirk that's holding her back, but the overall inattention paid to female characters in My Hero Academia. It's unlikely she'd ever be strong enough to rival Class 1-A's Big Three, but if given a chance, she could definitely become a high-ranking combat hero in her own right.