With the zodiac curse now broken and only one episode left (barring any potential OVA bonus episodes), the Fruits Basket anime is now in its final stages of resolution. The ending of this story, however, is only the beginning of many new ones for the Sohma family. Now that they're free from the curse painfully bonding them to each other and keeping them away from the outside world, the Sohmas can start working toward new goals and hopefully happier lives.

Episode 11's montage of the curse-breaking did not show Yuki's reaction, so Episode 12 starts there. Yuki's already meeting with Machi when the curse breaks. As The Rat was the first animal to accept the bonds with God, Yuki has the most intense experience of those bonds breaking, with a vision of his animal spirit leaving him and God saying a grateful goodbye. When Machi asks what's happening, Yuki can only speak confusingly about a beautiful yet painful connection disappearing, but explanations don't matter. As he was planning to do, he confesses his love for Machi -- and now he can hug her without transforming. 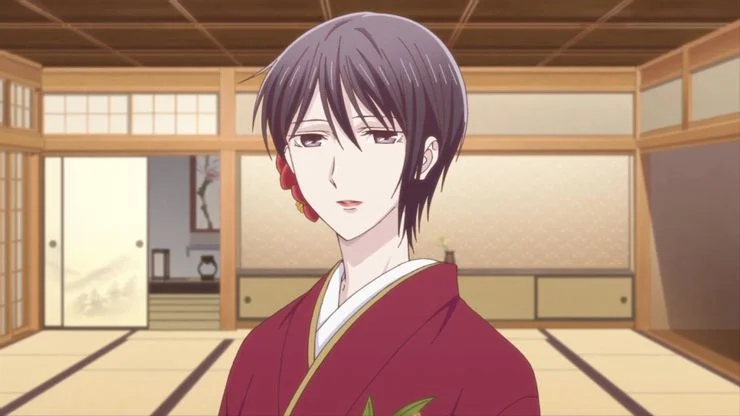 The Sohmas meeting up after the curse is broken provides a lot of great little comedic moments: Rin being jealous of Haru still loving Yuki, Momiji and Kagura teaming up to bother Kyo, Ayame being as uncomfortably smothering as always, Ritsu actually having speaking lines for the first time in forever. Ritsu's most memorable line of Episode 12 comes in response to the meeting's big dramatic reveal: that Akito is now living openly as the woman she is, rather than the male role forced upon her by her abusive family.

While Akito's new beginning is worth celebrating, some old habits die hard. Shigure sees this new beginning as a chance for a fresh start on his and Akito's relationship, despite how toxic it's been in the past. As frustrated as she is with him, Akito does still have genuine passion for Shigure and the two get together again. Nobody said breaking the curse would mean everyone starts making smart decisions. 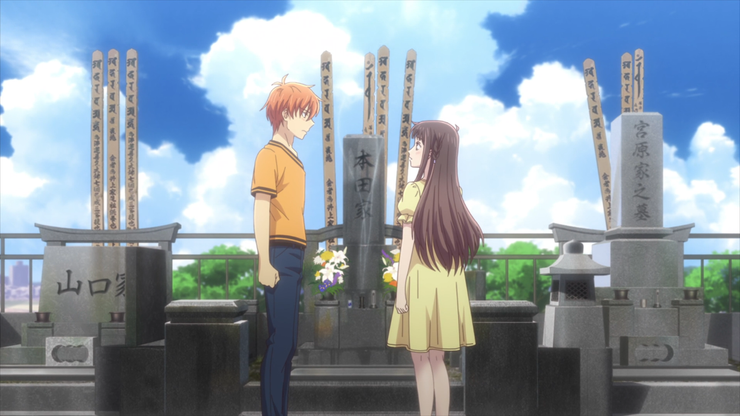 Kyo, who has gained the most freedom now that his double-curse is gone, is making plans to keep up his martial arts training and travel to another dojo. He also wants to be with Tohru but doesn't want to pressure her if she doesn't want to, which turns out to be nothing to worry about at all -- of course Tohru wants to travel with him.

Because this is the final season of Fruits Basket, every episode has to have some sort of tearjerker moment, so the final scenes flashback to another ending/"new beginning": Kyoko's death and ascension to the afterlife. Tohru's instincts that Kyoko didn't hate Kyo are proven right -- her last words about "never forgiving" him were cut short, as she was actually trying to ask him to protect her daughter. The final images of Kyoko being reunited with Katsura in the afterlife would have had even more impact had their backstory not been cut from the anime, but they still pack an emotional punch on their own.