The official website for the feature-length film of Shigeyoshi Tsukahara and Twiflo's original anime project Kurayukaba announced on Friday that professional storyteller Matsunojō Kanda will play the main character Sо̄taro, who pursues the mystery of the mass disappearance in the deep subterranean world.

The new crowdfunding campaign was intended to fund a film of more than 40 minutes in length. Shigeyoshi Tsukahara ("The Man Traveling with the Brocade Portrait," "Joseito," "Hashi no Mukou," SEKAI NO OWARI rock band's in-concert anime footage and set design) is making his feature-length directorial debut with the anime at Makaria. Kazunori Minagawa (animation director on Macross Delta, Tokyo Ravens, Yuruyuri, Code Geass: Akito the Exiled) is designing the characters, and Ryo-timo (Yozakura Quartet) is credited as special animator.

maxcaffy is handling CG and serving as director of photography. Pochi is in charge of art setting and the original backgrounds. The "design works" staff members are Chōta Akatsuki, Keeze, Takeshi Ishikawa, Kazunoko, Kitsuneiro, Kahi, and Shie Nanahara. 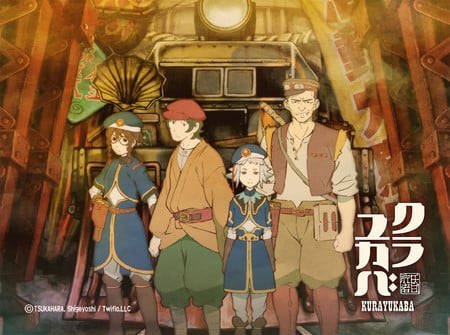 Our story is set beneath the surface of the great metropolis, below the district of Ogi-town in a realm of dreams that floats in a haze of purple lignite smoke.

A network of roads stretches away underground, concealing bandits at every turn! An armored train snakes through the looming darkness: the steel-clad train Sokore 463 is equipped with a 75mm mountain gun that can blow a target to smithereens! In command is the mysterious girl Tanne.

What awaits her and her comrades? From the winding alleys of Akegata (dawn) to the deep subterranean world of Kuragari (dark), a daring adventure unfolds!

The project screened at the 2018 Annecy International Animated Film Festival in June 2018.

The project's novella by Ryohgo Narita (Durarara!!, Baccano!) will be available for those who backed the project at the "Rental Shop" tier (12,000 yen, or about US$110). The novel centers on Kagari, the "garden spinner" girl who works in a mapping and information service in the labyrinthine and ever-changing capital city. She and her colleague get involved in a conspiracy.