The second part will premiere on Netflix worldwide on October 7. 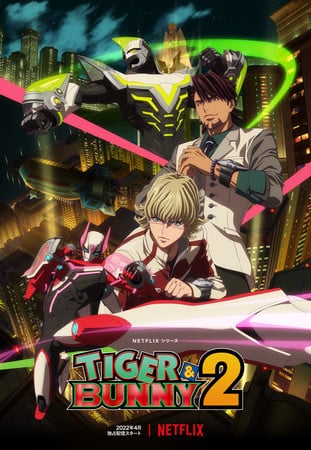 Netflix began streaming the anime's first 13 episodes (Part 1) all at once on April 8 worldwide. The anime will have 25 total episodes. Netflix describes the new anime:

Fighting for peace — and their sponsors — the odd couple of Wild Tiger and Barnaby continue to work as superheroes. But with the number of superheroes increasing around the world, how will these two veterans fare!?

The new anime tells a new story set after the events of the Tiger & Bunny The Movie -The Rising- anime film. The anime features a returning cast.

Atsuko Kase (Mobile Suit Gundam 0083: Stardust Memory) is directing the new anime at Bandai Namco Pictures. Masafumi Nishida is returning to supervise and write the series scripts, and Masakazu Katsura is back to design the characters and hero suits.

The 2011 anime series spawned two anime movies: Tiger & Bunny the Movie: The Beginning in 2012 and Tiger & Bunny The Movie -The Rising- in 2014. Viz Media released the television series, the films, and the tie-in manga in North America.