The official website for the upcoming Backflip!! (Bakuten!!) anime film based on the original television anime revealed the film's new trailer on Friday, which reveals and previews Centimillimental's insert song "Hikari no Naka kara Tsutaetai koto" (Something I Want to Tell You from Inside the Light). The website revealed that the film will premiere on July 2.

The website also revealed that the band wacci will perform the theme song "Bokura no Ippo" (Our Single Step).

The film will have a special screening event at the Shinjuku Wald 9 theater on June 11. Staff members Shimba Tsuchiya, Kaito Ishikawa, Takashi Kondo, Hiro Shimono, Hiroshi Kamiya, and Ayane Sakura will attend at the event.

The film will depict the "Ao High" boys' rhythmic gymnastics team's final challenge at the inter-high tournament and will feature a returning cast and staff. 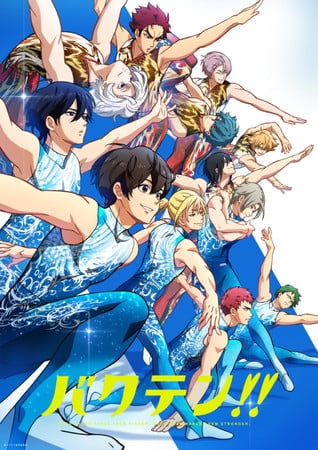 The Backflip!! original television anime premiered on Fuji TV's Noitamina programming block in April 2021. Crunchyroll streamed the anime as it aired in Japan. The 12th and final episode aired on June 18.

The anime, which is set in Miyagi Prefecture, is one of three anime projects part of the larger "Zutto Ōen Project 2011 + 10..." initiative aimed at promoting Miyagi, Iwate, and Fukushima (the other two anime projects are Misaki no Mayoiga and Hula Fulla Dance). The "Zutto Ōen Project 2011 + 10..." is in remembrance of the 2011 Tōhoku earthquake and tsunami 11 years ago.

The anime is set in Miyagi Prefecture's Iwanuma City, and centers on a high school rhythmic gymnastics team. The anime follows Shōtarō Futaba, who is fascinated by gymnastics after seeing it in his third year of middle school, and joins the rhythmic gymnastics team of his new high school Sōshūkan High School, nicknamed "Ao High." He makes a friend with his schoolmate Ryōya Misato, who earned fame as a gymnast during middle school.

Kei Sakuraba drew a manga adaptation, which premiered in Kodansha's Dessert magazine in January 2021. The manga ended on September 24.