Funimation also announced that it will begin streaming the English dub for the television anime of Kagiji Kumanomata's Sleepy Princess in the Demon Castle (Maōjō de Oyasumi) manga on Monday. Kira Buckland will voice Princess Syalis.

The How NOT to Summon a Demon Lord Ω anime will premiere on April 8.

Satoshi Kuwabara (Dagashi Kashi 2, Black Jack) is directing the second season at Tezuka Productions and Okuru to Noboru. Kazuyuki Fudeyasu is returning from the first season to handle series composition, and Shizue Kaneko is again designing the characters.

Yū Serizawa with two as-yet announced artists are performing both the opening and ending theme songs. 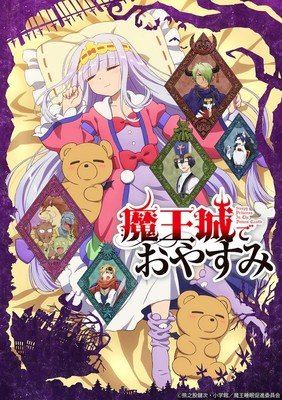 The Sleepy Princess in the Demon Castle anime premiered on TV Tokyo on October 5. Funimation streamed the anime as it aired in Japan. The anime had 12 episodes.

Sshhh! Princess Syalis is trying to get a good night's sleep. Some shut-eye. Forty winks. Catch some Z's. Long ago in olden times when people and demons lived together in—well, disharmony, really – a demon king kidnaps a human princess and imprisons her in his castle. Bereft, the princess's subjects beat their chests in anguish…until a hero arises to spearhead Project Rescue Our Princess! While waiting for her knight in shining armor, what's an imprisoned princess to do …? Teddy-bear guards with bat wings are all very well, but her dungeon cell is bo-o-o-ring! So, she decides to wile away the long hours by sleeping. Now if only she could get comfortable…and didn't suffer from insomnia…