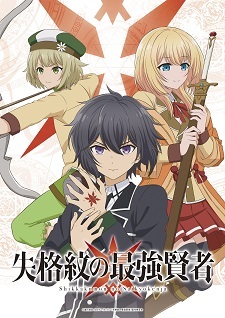 Noriaki Akitaya (Bakuman., Ore wo Suki nano wa Omae dake ka yo) is directing the anime at J.C.Staff. Hiroki Uchida (Gamers!, Merc Storia: Mukiryoku no Shounen to Bin no Naka no Shoujo) is in charge of the series composition.

Synopsis
In a world of magic, the powers and future of a mage are predetermined at birth through so-called "Marks"—four symbols that categorize a human's aptitude for magic. Lamenting the fact that his mark was considered ill-suited for combat and only useful for magic augmentation, an incredibly skilled sage decided to reincarnate thousands years in the future.

Reborn as Mathias Hildesheimr—a six-year-old boy and the third son of a duke's family—he attains the mark of close combat he always desired. Unfortunately, it is also discovered that mankind's knowledge of magic and swordsmanship has drastically deteriorated in this era; only shoddy magic equipment can be sporadically found, while even the most basic spells have been forgotten. To add insult to injury, his current mark, once hailed as the most powerful, is now viewed as the worst.

When Mathias becomes 12 years old, his unrivaled swordsmanship lands him in the Second Royal Academy. Shattering prejudices, he promptly makes ripples in the academy and beyond. However, the former sage uncovers signs of dark forces working in the shadows, and with humanity weaker than ever, it is up to Mathias to thwart their evil plans. [Written by MAL Rewrite]

Shinkou originally penned the adventure fantasy novel on the Shousetsuka ni Narou website beginning December 2016. SB Creative acquired the series for physical publication the following May, featuring illustrations by Huuka Kazabana. The 12th volume shipped last May, with the 13th volume going on sale on March 12. Shikkakumon no Saikyou Kenja has a cumulative 4 million copies of its volumes in print.

Kansho and Hyoko began drawing a manga adaptation in Manga UP! web magazine in June 2017. Square Enix published the 13th volume on December 11.

Shinkou and Kazabana launched a side story titled Senmetsu Madou no Saikyou Kenja: Musai no Kenja, Madou wo Kiwame Saikyou e Itaru (The Strongest Sage of Annihilation Magic: The Unskilled Sage, Mastering Magic and Becoming the Strongest) under the GA Bunko imprint on September 11 last year. The second volume was published on December 10.

A manga adaptation of the side story by Yue Ling and Jea Pon (Jikan no Shihaisha) has been serialized in Manga UP! since September 15 last year. The first volume went on sale on December 11.

Square Enix licensed the manga adaptation in English under its new Manga & Books imprint in July 2019 and published the third volume on January 26. The fourth volume is planned for a July 27 release.