Publishing company Kadokawa announced a television anime adaptation of Fe's Koroshi Ai (Love of Kill) manga on Friday. The January 2021 issue of Comic Gene, scheduled for a December 15 release, will feature the announcement on its cover (pictured). 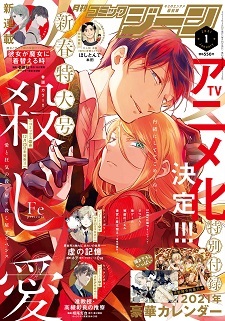 Synopsis
The silent and stoic Chateau Dankworth is a bounty hunter. Her target: Son Ryang-ha, a notorious killer known for killing 18 high-class officials in a single night. To this day, his murders remain swift, efficient, and bloody. However, after Son Ryang-ha overpowers Chateau in their first encounter, he reveals his own intentions: he too is after her, aiming for her heart.

Son Ryang-ha's attempts to catch her eye are quite unique, to say the least. He offers gifts to her in the form of her current targets, tied up and battered, and will do anything to spend more time together. Reluctantly, Chateau goes along with this act, and so begins the cat-and-mouse game of love between two killers. [Written by MAL Rewrite]

Fe debuted the josei action manga in Comic Gene in October 2015. Kadokawa published the ninth volume on June 27, with the tenth volume going on sale on December 25. Koroshi Ai has a cumulative 620,000 copies of its volumes in print.

Yen Press licensed the manga in English this October and plans to release the first volume on March 23, 2021.