After nearly 12 years since Trigun: Badlands Rumble and double that for the 1998 TV anime series, Studio Orange surprised the world with an announcement for TRIGUN STAMPEDE two weeks before Anime Expo. Featuring Yasuhiro Nightow (creator), Kouji Tajima (character concept and concept design artist), Kiyotaka Waki (producer), and Katsuhiro Takei (producer), the panelists had a lot of surprises they were eager to share. As they walked on stage, Producer Takei mentioned the panel was being streamed live so the fans in Japan and around the world could join them at Anime Expo. Hitting nearly 43,500 viewers on the Twitter Live, and almost 1,500 guests in person, excited Trigun fans were eager to get a first look at Stampede. 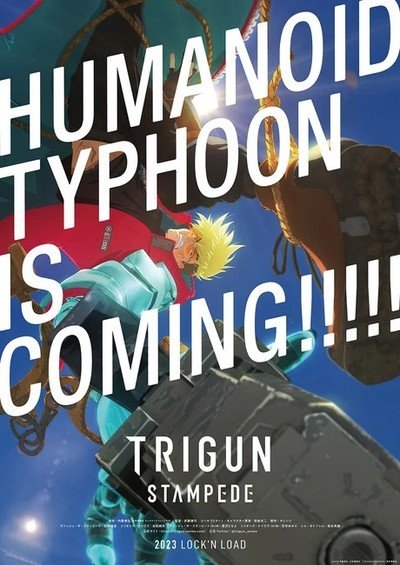 Starting off with a pre-prepared Q&A, author Nightow was asked what Trigun meant to him. He revealed that after he finished writing the manga, he saw bloodstains on the ground. Despite his efforts, he admitted he “didn't know where the story was going” and ended up struggling and bleeding on the ground. However, he kept on drawing because the only thing he could keep doing was “the most [I] could at the time.” Given the heavy atmosphere, he cheekily apologized for the “funeral” like backstory.

From the witty banter between the guests, the Studio Orange team and Nightow spoke like old friends on this project. When Takei openly admitted his love for Trigun was why the STAMPEDE was being made now, Nightow snapped with, “he never said that to me!” Takei lightened the mood by revealing the image of the anime's teaser image. Director Muto, who couldn't make it, had prepared the rough drawing of the teaser and wanted it to be the first message to the world.

Nightow wanted to emphasize that the keyword in the image is the key word “Coming,” not “Coming back.” They didn't explicitly say their intention behind those words, but the team wanted to highlight how STAMPEDE is not simply a continuation. To those wondering why the title isn't simply ‘Trigun’, the title “TRIGUN STAMPEDE” references Vash's last name as they wanted to dig into him as a character. “He's foolish, but cool, and this is the request I gave to Muto.”

TRIGUN STAMPEDE will be Kenji Muto's first directorial work, but he's worked as an episode director for Orange's BEASTARS and Land of the Lustrous. Producer Waki and Muto had previously worked on a music video. It just so happened that after Waki started working at Orange, he produced Land of the Lustrous with Muto as an episode director, later introducing him to Producer Takei. Takei was so impressed by Muto's storyboards that Takei sought him out as a series director when Orange confirmed they were working on Trigun.

As another surprise, the panelists pulled up the concept art drawn by Tajima. He revealed that it had been 5 years since he had drawn the art. After suddenly being called to meet by Waki at a cafe, he asked Tajima to draw up concept art. “Although I loved anime and manga, I never worked on it before. I've only worked on live action series,” said Tajima. He ended up drawing over 400 images for Waki, but the concept art shown at the panel was the first look the producers wanted to put into the world.

The producers signaled to show the exclusive sneak peak, which was met with a roaring applause and gratitude. Starting off with Rem sending Knives and Vash out in the pod, the dramatic tone of the trailer set the stage for what to expect for the rest of the series. It sets itself apart from its comedic 90s counterpart and prepares the audience for a serious exploration of Vash's pacifist ideology.

Shortly following the teaser trailer was a message from Director Kenji Muto, who was unable to make it to the panel. He lamented how the rest of the team was enjoying pizza in Los Angeles while he was “left alone in Tokyo to work hard on the series.” Within in his video, he implied the relationship Rem, Vash, and Knives is integral to STAMPEDE. He promised “dynamic motion, tons of action, and an overall epic sci-fi show” as he raised his Asahi beer for a cheer.

The final portion of the panel dived deeper into the team's personal relationship with the manga and anime series. Waki revealed the challenge with CG challenges is character expression. “To do rich expressions, we refer to old Disney cel-drawn movies like Tarzan. I really studied hard on how to bring those expressions to CG animation.”

In response to the elephant in the room—why go the route of 3D CG—Takei agreed that the manga is a masterpiece in and of itself and so was the '98 anime. “But I thought that as animation, we can do something else with it and that's how I came up with 3D CG. The best studio to do it is Orange which is why I asked them to do it.”

Waki discussed his indirect relationship with the original anime as he previously worked at Madhouse. “Although, I never worked on it directly, they were working on Rumble at the time. My mentor was Maruyama Masao, who produced it.” Muto never worked at Madhouse, but he was at MAPPA with Director Satoshi Nishimura, who was the director for the 90s Trigun TV anime. “It's not because our masters' were doing it—as both our director and producer's masters worked on Trigun—we wanted to overcome that.”

Producer Takei held back and confessed that they can't reveal any more to the story beyond what they showed today. “As you saw with the director and script, we have to say this is a different Trigun. That's why the cast is all new.” He further clarified, “The script has been in development for a long time. Nightow has been with us the whole time. I feel safe because he would recommend that I watch this or that Hollywood movie. He would walk me through with advice like, 'It's a film, so the script reflects a movie.'” 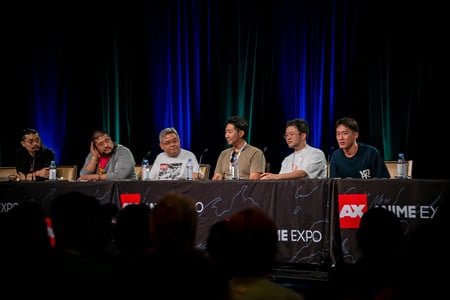 The panelists moved into the final section and had to say goodbye. Producer Takei reflected, “We only discussed what challenges we do with new Trigun, but what came out is pure entertainment. It's a different Trigun but still the same.”

Animation producer Waki spoke to how the project started 5 years when he reached out to Tajima to draw concept art for TRIGUN STAMPEDE. “I watched the anime, but never read the manga. When I had a trip to America, I stuffed all of the manga into my luggage and read it all on the plane.” His life since has been constantly working and thinking about STAMPEDE. “As a studio producer what I wanted to focus on how I'm going to make it happen. You saw what we were able to bring to the trailer, but the show is more than that.”

Concept artist Tajima admitted that he was brought to tears as it was something he started together with the team almost 6 years ago. “I saw everyone's reaction today and I was tearing up there as well. It touched me so much that it made me feel the same way as when my child was born 2 years ago. Please look forward to the 400 designs and characters you're going to see from now on.”

Nightow, with another cheeky response, “Are you sure you're ok comparing the trailer and the birth of your son? Do you want to consult your wife about that?” To which Tajima promised to talk to his wife and his son about this.

Nightow himself was touched by everyone's reaction to the trailer. “It blew my mind that I forgot about the pizza taste. I've constantly had this worry that people who love Trigun could not come today. We're going to keep on moving forward and making this Trigun!”