The official Twitter account for FUUTO PI, the television anime of the Fūto Tantei manga, began streaming a new promotional video for the anime on Friday. The video previews the theme song "Tsumi to Batsu to Angura."

The anime will premiere on the Tokyo MX channel on August 8 at 10:00 p.m. (9:00 a.m. EDT), but it will stream first on the U-NEXT service on August 1 at midnight. Crunchyroll will stream the anime in August in "North America, Central America, South America, Europe, Africa, Oceania, the Middle East and CIS."

The anime project commemorates the 50th anniversary of the Kamen Rider franchise. Funimation initially announced that it would stream the anime, but Crunchyroll is now streaming Funimation's titles. 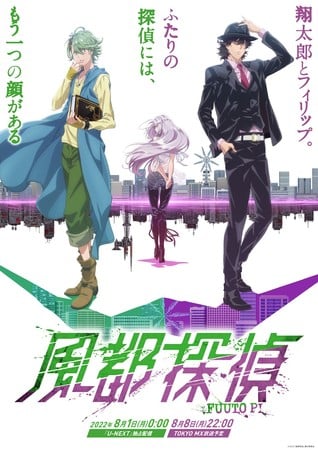 The manga is a sequel project for the 2009 Kamen Rider W (pronounced "double") series. Riku Sanjō, a crucial writer for the original series, is in charge of the manga's scripts. Masaki Satou (Love Theory) is drawing the manga. Toei producer Hideaki Tsukada is supervising the manga. Katsuya Terada (Blood: The Last Vampire, Silk Road Kids) is credited for creature design. As with the original series, the new sequel is once again set in Fūto city and focuses on the characters Shotaro Hidari and Philip.