The official website for the television anime of Yuto Yotsuba and Ryō Ogawa's Ya Boy Kongming! (Paripi Kōmei) manga began streaming the anime's second promotional video on Tuesday. The video reveals and previews QUEENDOM's opening theme song "Chikichiki Banban." QUEENDOM is a new music unit made up of hibiki and moka from lol, Akina and Taki from FAKY, and Maria Kaneya from GENIC. 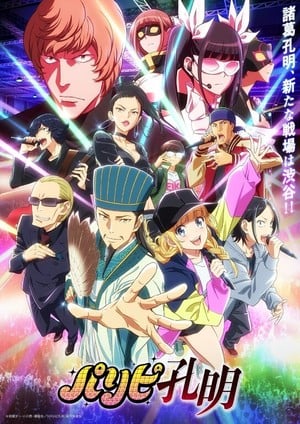 The anime will premiere on April 5 on the Tokyo MX, MBS, and BS NTV channels.

Kaede Hondo stars in the show as the speaking voice of the musical artist Eiko Tsukumi, but 96Neko provides the character's singing voice. Ryotaro Okiayu costars as Zhuge Kongming. The other cast members include: Shōya Chiba as Kabe-Taito, Hibiku Yamamura as Nanami Kuon (singing voice not yet announced), and Jun Fukushima as Owner Kobayashi.

General of the Three Kingdoms, Kongming had struggled his whole life, facing countless battles that made him into the accomplished strategist he was. So on his deathbed, he wished only to be reborn into a peaceful world... and was sent straight to modern-day party-central, Tokyo! Can even a brilliant strategist like Kongming adapt to the wild beats and even wilder party people?!