Manga creator Nanaki Nanao announced on Monday that an anime adaptation of Nanao's fantasy manga Helck has been green-lit. The creator drew an illustration to celebrate the news and thank the fans: 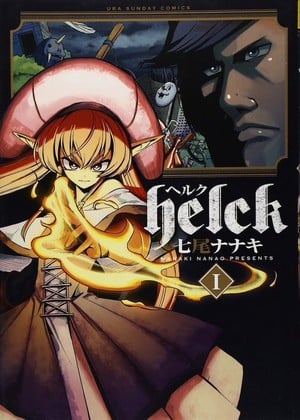 The manga is set in a world after the demon king has been overthrown. Vamirio of the "Four Heavenly Imperial Rulers" has been hastily put in charge of the tournament in the demon realm to determine the next demon king. She finds out that a human warrior named Helck is somehow competing in the tournament. Helck proclaims that he hates other humans, but Vamirio simply can't believe him ...

Nanao began serializing the manga on the Manga ONE and Ura Sunday services in 2014, and ended it in 2017. Shogakukan published the manga in 12 volumes.

As a part of a "Helck Festival" campaign, Manga ONE is presenting 30 chapters of the manga for free from Monday to next Sunday. The campaign is also republishing the manga in a new edition, with a volume shipping every month from April 12 to March 2023.

Update: The headline on video game news service Famitsu's article on the anime lists the project as a television anime, but no other news website has listed the anime for television, including the anime's official website.