Tsuburaya Productions and Trigger revealed on Monday at the Tsuburaya Convention 2021 livestream event that their "Next Gridman Universe" installment will be a movie. The companies are streaming a video for the new project, which reveals the staff.

The below visual for the film features Gridman and Dynarex together. The companies' SSSS.Dynazenon anime ended in June with a teaser card for the "Next Gridman Universe" and the words "Gridman x Dynazemon," and then stated in October they would reveal the new installment this winter.

The SSSS.Gridman anime was the first anime in the "Gridman Universe." The 12-episode series premiered in October 2018. The anime was a collaboration between the anime studio Trigger and Tsuburaya Productions — the creator of the Ultraman franchise and the original 1993-1994 live-action tokusatsu (special-effects) series Denkō Chōjin Gridman. Crunchyroll and Funimation streamed the anime as it aired, and Funimation also streamed an English dub for the anime. 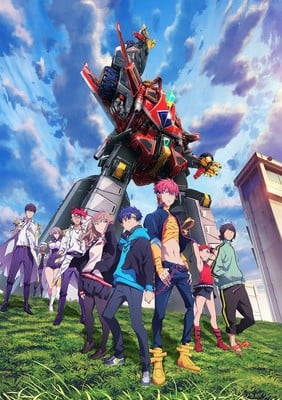 The SSSS.Dynazenon anime premiered on April 2. Funimation streamed the anime as it aired in Japan. The anime is listed as being part of the "Gridman Universe."

"Gridman" is credited with the original work, and Akira Amemiya returned from SSSS.Gridman to direct the anime at Trigger. Other returning staff members included Keiichi Hasegawa as scriptwriter, Masaru Sakamoto as character designer, and Shiro Sagisu as composer. Graphinica returned from SSSS.Gridman to handle the 3DCG production on the new anime.

The franchise has also inspired a stage play adaptation, a manga adaptation, multiple manga spinoffs, and a novel spinoff. The stage play was slated for spring 2020 but was canceled due to the new coronavirus disease (COVID-19) pandemic.