The "Made in Abyss Online Fan Meeting - Cave Raiders Guild Rally –" event debuted the first English-subtitled promotional video and a key visual for Made in Abyss: Retsujitsu no Ōgonkyō (Made in Abyss: The Golden City of the Scorching Sun), the second television anime season based on Akihito Tsukushi's Made in Abyss manga, on Sunday. 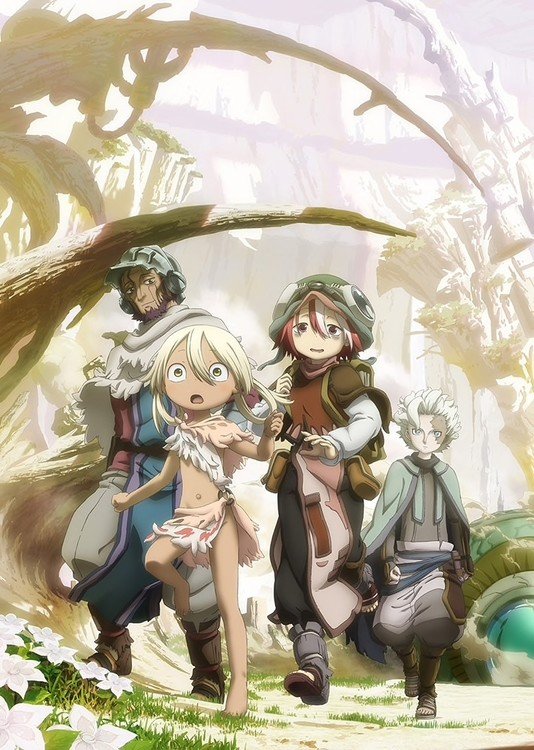 Sentai Filmworks licensed the second season for release in digital and home video next year.

In the story of Made in Abyss, an enormous pit and cave system called the "Abyss" is the only unexplored place in the world. Strange and wonderful creatures reside in its depths, and it is full of precious relics that current humans are unable to make. The mysteries of the Abyss fascinate humans, and they head down to explore. The adventurers who venture into pit are known as "Cave Raiders." A little orphan girl named Riko lives in the town of Ōrth on the edge of the Abyss. Her dream is to become a Cave Raider like her mother and solve the mysteries of the cave system. One day, Riko starts exploring the caves and discovers a robot who resembles a human boy.

The first 13-episode television anime series based on the manga premiered in Japan in July 2017. Sentai Filmworks licensed the series and released it on Blu-ray Disc in October 2018. The English-subtitled version of the show streamed in the United States on Amazon's Anime Strike service, and HIDIVE streamed the series outside of the United States. The dub is also streaming on HIDIVE.

The first compilation film for the anime, Made in Abyss: Journey's Dawn (Made in Abyss: Tabidachi no Yoake), opened in Japan in January 2019, followed by the second film, Made in Abyss: Wandering Twilight (Made in Abyss: Hōrō Suru Tasogare), two weeks later. Sentai Filmworks premiered the first film in Los Angeles in March 2019, before it opened in theaters later that month. Sentai Filmworks premiered the second film in Rosemont, Illinois in May 2019, before it opened in theaters in the United States later that month. Both compilation films are streaming on HIDIVE.

Made in Abyss: Dawn of the Deep Soul, a sequel film to the first season, opened in Japan in January 2020. It ranked at #9 in its opening weekend, earning 102,284,000 yen (about US$929,300) in its first three days. Sentai Filmworks premiered the movie in select theaters in the U.S. and Canada in August 2020. Sentai Filmworks again screened the film virtually in September 2020, and HIDIVE will begin streaming the film on Monday.

Spike Chunsoft is developing a new 3D action RPG titled Made in Abyss: Binary Star Falling into Darkness (Made in Abyss: Yami o Mezashita Rensei) for PlayStation 4, Switch, and PC (via Steam) in 2022.

Sony's Columbia Pictures has ordered a feature film script of the manga from writer and director Kevin McMullin. Roy Lee's Vertigo Entertainment and Mobius Productions' Masi Oka (Heroes' Hiro Nakamura actor, Outer Wilds game) are producing the project, after previously collaborating on the 2017 Death Note film (as well as its planned sequel) and the live-action The Promised Neverland series in development at Amazon.