GKIDS announced on Wednesday that it will screen the original short anime Deiji Meets Girl ("Deji" Meets Girl) in theaters on June 2 as a double feature following its screening of the Fortune Favors Lady Nikuko, Studio 4°C's anime film.

The Deiji Meets Girl anime premeired on October 1 "in the tail end of the Super Animeism" block on MBS, TBS, and 26 other affiliated stations. The anime had 12 90-second weekly episodes.

The anime had its international premiere as a closing-day screening of Montreal's 25th Fantasia International Film Festival last August.

The wondrous story is set in motion one summer when Maise Higa, a listless first-year high school girl who works part-time at the front desk of her family's hotel in Okinawa, meets an "Ichirō Suzuki," a mysterious youth who came alone from Tokyo as a hotel guest. Since Suzuki's arrival, "dëji" things have been happening around Maise, like fish swimming around the room or a giant banyan tree smashing through the hotel ceiling. ("Dëji" is an Okinawan word that means "totally" or "very.") 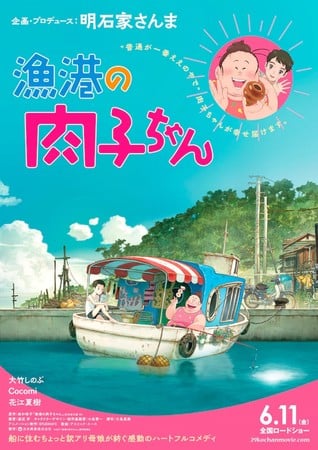 The film won the "Axis: The Satoshi Kon Award for Excellence in Animation" award as a Special Mention at Montreal's 25th Fantasia International Film Festival in August, and also won the Korean Society of Cartoon and Animation Studies (KOSCAS) President's Prize in the Special Awards category at the 23rd Bucheon International Animation Festival (BIAF) in October. Additionally, the film won the Scotland Loves Anime Festival's Jury Award in October. The film won the animation category in the Hochi Shimbun's 46th Hochi Film Award in December. The film also won the Excellence Award at the 25th Japan Media Arts Festival Awards in March.

Gentosha published the original novel in April 2014. The "human drama" novel centers on a mother named Nikuko and her daughter, Kikuko, who live on a boat. The novel follows their paths in life, and their growth. The novels have more than 350,000 copies in print.