The official website for the television anime of author Nachi Kio and illustrator Eretto's Boku-tachi no Remake (Remake Our Life!) light novel series revealed a promotional video, July debut, and the show's opening and ending theme song artists on Sunday. The anime will air on Tokyo MX, Sun TV, KBS Kyoto, and BS-NTV in Japan. 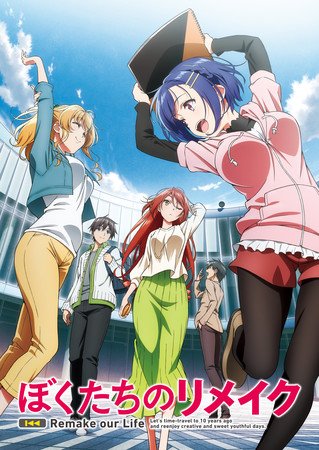 Tomoki Kobayashi (Akame ga KILL!, Infinite Dendrogram) is directing the anime at feel. Kio is credited as the original creator, and is in charge of the series scripts. Kōsuke Kawamura is designing the characters, and Eretto is credited for the original character designs. Front Wing is producing the series.

The story centers on the unsuccessful game director Kyōya Hashiba. His company goes bankrupt, and he ends up returning to his parents' home. He lies in bed thinking about the successful creators of his generation. When he opens his eyes, Kyōya finds that he has gone back in time 10 years to when he started college. He has an opportunity to remake his life, starting as an arts college student. He now lives in a four-person coed share house. Kyōya has the chance to spend his formative years with creators he knows will be famous in the future, but things might not turn out as he expected.

Bonjin Hirameki launched a manga adaptation of the novel series on Kodansha's Suiyōbi no Sirius (Wednesday Sirius) section on the Niconico service in November 2018.