The official website for the Nintama Rantaro anime announced on March 31 that the anime will have five new episodes depicting the five most popular duos from the franchise, which fans will decide with a popularity poll that began on March 31 and will go through May 8. 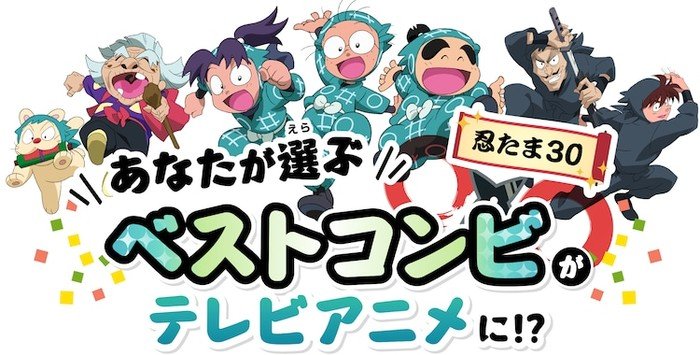 Fans can choose between Rantaro, Kirimaru, Shinbee, Yamada-sensei, and Doi-sensei as the first choice, and pair them with another set of characters for the second choice.

NHK also announced on March 31 that the anime is getting a new half-hour special titled "100% Yūki! Dokutake Dejiro wo Yattsukero no Tan." NHK will reveal the episode's broadcast time and date at a later date. In the special, Rantaro, Kirimaru, and Shinbee are taking a stroll and come across a beautiful field, and the students of the ninja academy then decide to take a field trip there. However, the field is actually full of poisonous mushroom traps.

The 30th series for the anime franchise will premiere on NHK Educational on Monday, kicking off a 30th anniversary celebration for the franchise.

Soubee Amako's original Rakudai Ninja Rantarō ninja gag manga centers around Rantarō, a ninja apprentice at an elite ninjutsu academy in historical Japan. As elementary students, Rantarō and his ninja-in-training friends are called "Nintama" — a contraction of the words "ninja" and "tamago" ("egg").