The film will open in Japan on July 22. Netflix will begin streaming the film on the same day.

Kyōhei Ishiguro previously announced during the film's screening at the Tokyo International Film Festival last November that the film would open on June 25, delayed from its original May 15 opening date due to the Japanese government's state of emergency declaration against the spread of the new coronavirus disease (COVID-19). 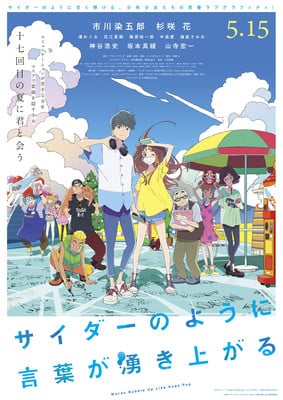 The "boy-meets-girl" story depicts how words and music bridge the gap between Cherry, a boy who is terrible at communicating with other people, and Smile, a girl who hides behind a mask. They meet in a mundane suburban shopping mall in a provincial city.

Cherry always wears headphones and puts the feelings he cannot utter into his hobby, Japanese haiku poems. Smile always wears a mask to conceal her large front teeth, for which she has dental braces. As a popular video star, she streams a video about seeking "cuteness."

Ōnoimo (Astoria Activate) launched a manga adaptation in Kadokawa's Monthly Comic Alive magazine in November 2020, and the manga ended in the magazine on March 27.