Ascendent Animation revealed on Monday a promotional English dub trailer for the anime shorts of ITKZ's boys-love manga The Titan's Bride (Kyojinzoku no Hanayome). The video previews an English-dubbed version of the theme song "Those Who Shout Love at the Center of the World" performed by the main characters' English voice actors Kiba Walker and Edward Mendoza. 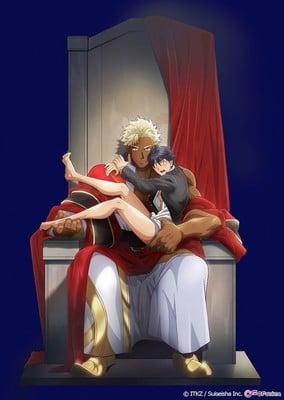 Ascendent's parent company Coolmic, WWWaveCorp, and Suiseisha Inc. are collaborating with Ascendent Animation to produce the dub. Ascendent Animation's President and COO Kiba Walker is adapting the script for the dub and also directing the dub. Steve Warky Nunez is in charge of audio engineering and mixing. K. Cornell Kellum is the executive producer. Cole Feuchter is the assistant scriptwriter and translator, and he is also in charge of acqusitions. Azrion Productions is in charge of talent sourcing, and Michaels Laws is credited for additional talent sourcing.

This is Ascendent Animation's second English dub project after Ishida and Asakura. The company stated it will "continue using talent from across the world and of the BIPOC/LGBTQ+ community, following Ascendent's promise to be inclusive and diverse."

The anime premiered on Tokyo MX in July 2020 as that season's ComicFesta Anime title. In addition to the regular broadcast edition of the anime shorts, a complete "premium edition" with explicit scenes streamed on the ComicFesta Anime website.

Yūki Ono and Kento Itō voiced the characters Caius Lao Bistail and Kōichi Mizuki, respectively, in both the anime and the separate drama CD that shipped with the manga's first compiled book volume in March 2020. Noriko Fujimoto voices Medina Nall Rosas, the ex-fiancée of Caius.

Junpei Washimi was the color key artist, and Ue-gaki was in charge of art design. Taichi Maezuka directed the art, and Masato Makino was the compositing director of photography with Natsuki Yasuda editing. Ayako Misawa directed the sound at Black Flag.