The official website for the television anime of Tomihiko Morimi's Tatami Time Machine Blues (Yojō-Han Time Machine Blues) novel unveiled a trailer and visual on Wednesday. The website also announced that the anime's theatrical compilation film version will screen in theaters at Shinjuku Wald 9 on August 12 ahead of its September 30 premiere and the television anime's September 14 debut. The video previews the theme song "Demachiyanagi Parallel Universe" by the group Asian Kung-Fu Generation. 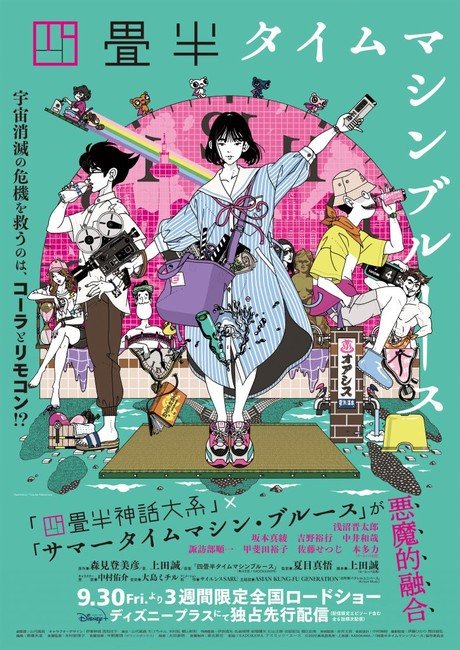 Advance tickets for the theatrical showing will go on sale on Friday, with a clear file as a bonus for physical ticket buyers and virtual wallpapers with a digital purchase. 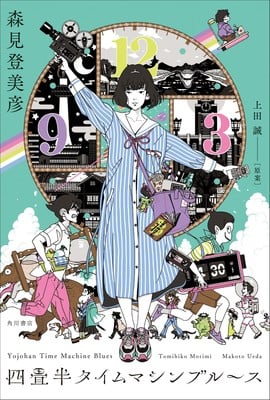 The anime will launch on Disney+ in Japan on September 14 at 4:00 p.m. JST. The anime will stream weekly on Wednesdays for a total of five episodes.

An original sixth episode will stream on October 12, and it will feature an original story not in the novel. It will be exclusive to Disney+ and will feature footage that will not be in the anime's theatrical compilation film version.

Tatami Time Machine Blues is a sequel to Morimi's earlier The Tatami Galaxy (Yojō-Han Shinwa Taikei) novel. It shipped in July 2020, 16 years after the original novel. The novel is inspired by Makoto Ueda's Summer Time Machine Blues stage play. Morimi wrote the novel, and Ueda, Morimi's friend, is credited with the original concept. The sequel novel combines elements of the stage play's story with the characters from Morimi's novel. Nakamura returned to illustrate the cover.

In the sequel novel's story, The Tatami Galaxy protagonist's trouble-making friend Ozu gets the student apartments' only air conditioner remote control wet, breaking it on a certain midsummer day. The students wonder what to do about the situation for the remainder of the summer and make a plan with Akashi. An unstylish male student from 25 years in the future arrives in a time machine. The protagonist travels back in time to try to retrieve the remote control before it is broken.

Most of the cast members are returning for the sequel anime, including Shintarō Asanuma as the protagonist "I" (Watashi), Maaya Sakamoto as Akashi, Hiroyuki Yoshino as Ozu, Junichi Suwabe as Jōgasaki, and Yuko Kaida as Hanuki. Kazuya Nakai will voice Higuchi, replacing the character's original voice actor, the late Keiji Fujiwara.

Setsuji Satoh is returning from The Tatami Galaxy anime to reprise the role of Aijima, and Europe Kikaku's Chikara Honda is similarly reprising the Tamura-kun role from the Summer Time Machine Blues stage play and subsequent live-action film.

Ohta Publishing released Morimi's The Tatami Galaxy novel in 2005, with Nakamura illustrating the cover. The novel inspired an 11-episode anime by Masaaki Yuasa in April 2010.

HarperCollins' HarperVia imprint will publish The Tatami Galaxy novel in English in fall of 2022. The release will be followed with the sequel novel Tatami Time Machine Blues in summer of 2023. Emily Balistrieri is translating both novels. Balistrieri previously translated Morimi's The Night is Young, Walk on Girl novel, which inspired a 2017 anime film also directed by Masaaki Yuasa off a screenplay by Ueda.