The staff for the Shimajirō to Kirakira Ōkoku no Ōji-sama (Shimajirō and the Prince of the Glitter Kingdom) CG anime film, the ninth movie in Benesse Corporation's Shimajirō anime franchise, revealed on Tuesday a trailer, poster visuals, guest cast, and March 11 premiere. The video reveals and previews the theme song "Kimi no Manma ga Iin da yo" by Shoko Nakagawa. 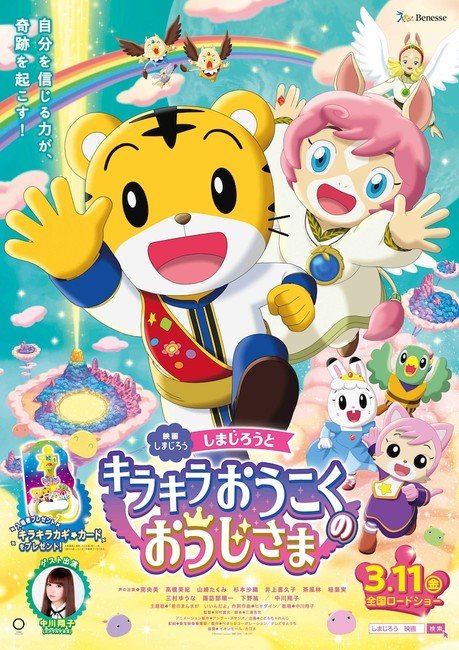 The cast includes (pictured below from left to right, starting with top row):

The story centers on Pearl, the prince of the Glitter Kingdom, who is preparing to become king. After he leaves the kingdom to go to Challenge Island, a situation causes the kingdom to lose its precious glitter. Shimajirō and friends set out with Pearl, who lacks self-confidence, on an adventure to find three keys to save the kingdom. 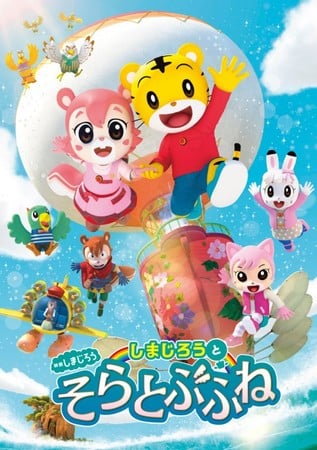 The Shimajirō to Sora Tobu Fune (Shimajirō and the Flying Ship) 3D CG anime film film opened on March 12, 2021 after being postponed from its February 28, 2020 opening due to concerns about the new coronavirus disease (COVID-19). The film is billed as the franchise's first 3D CG anime film.

The film's story centers on Jin, an inventor squirrel who lives in Greenwood, a land far beyond the sea. Rain has not come to Greenwood in a long while. To solve the land's problem, Jin decides to build a flying ship to make the rain fall, and he enlists Shimajirō's help.

The original Shima Shima Tora no Shimajirou television anime aired in Japan from 1993 to 2008. The sequel Hakken Taiken Daisuki! Shimajirō aired from 2008 to 2010 and continued under the new title Shimajirō Hesoka from April 2010 to March 2012. The Shimajirō no Wow! anime and variety series premiered in 2012, and was nominated in the Animation category of the International Emmy Kids Awards in October 2015. Eiga Shimajirō: Mahō no Shima no Daibōken (Shimajirō the Movie: Great Adventure on Magic Island), the franchise's first full-length, all-animation film, opened in Japan in March 2018. Another film opened last March.