Kadokawa announced on Thursday that Haruki Kuō's Liar Liar light novel series has an anime adaptation in the works. The announcement added, "It's April Fool's Day, but this isn't a lie." Voice actress Akari Kitō narrates the special promotional video that announces the news as Sarasa Saionji, the school's (one-time) reigning queen: 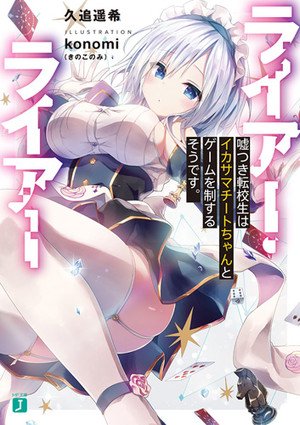 The "academy x mind game x romantic comedy" story is set on the "Academy" island where students battle to determine their rankings. Hiroto Shinohara earned the highest ever grade in this school's entrance exam, the toughest in the entire country. On his first day at the school, he takes down the previous reigning queen, Sarasa Saionji, and becomes the fastest ever student to join the school's elite "Seven Stars."

Except, he didn't really. It's all a lie. Now to maintain his top ranking, he must fight these school mind games with lies and bluffs. He does whatever it takes with the help of the cute "cheat maid" Shirayuki Himeji (voiced by Miku Itō in a previous promotional video) and even Saionji (who is actually a phony herself).

Kadokawa's MF Bunko imprint launched the novel series with art by the Kinokonomi illustrator unit member konomi in April 2019, and the seventh volume shipped on March 25. The series has over 150,000 copies in circulation. Funa Yukina serializes the manga adaptation in Kadokawa's Monthly Comc Alive magazine, and the second compiled book volume shipped on November 21.