Funimation announced on Thursday that it will screen Knights of Sidonia: Love Woven in the Stars (Sidonia no Kishi: Ai Tsumugu Hoshi), the all-new anime film based on Tsutomu Nihei's Knights of Sidonia (Sidonia no Kishi) manga, in theaters in the U.S. and Canada starting on September 13. The film will screen in Japanese with English subtitles and with an English dub. Funimation also revealed that it will begin streaming all 24 episodes (both seasons) of the Knights of Sidonia anime on August 3 in the U.S., Canada, the U.K., and Ireland, in addition to Australia and New Zealand. The company streamed an English-subtitled trailer for the film:

The film's Japanese and English casts include (Japanese/English): 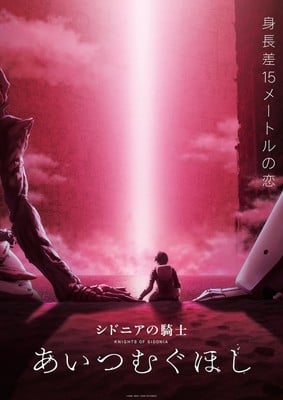 The staff delayed the film's opening to June 4 due to the new coronavirus disease (COVID-19) and the extended state of emergency in Japan. The film was previously scheduled to open in Japan on May 14. The new film takes a different path from the manga, and features a brand new story supervised by Nihei. The film brings back the returning cast members. The all-new story is set 10 years after the television series with characters returning from the previous story.

Knights of Sidonia anime co-director Hiroyuki Seshita returned as the chief director for the film, while Tadahiro Yoshihira, the previous editor for the anime, directed this new film at Polygon Pictures. Sadayuki Murai and Tetsuya Yamada returned to pen the script. Mitsunori Kataama returned as art director, while Reiji Nagazono was the animation director. Naoya Tanaka returned for production design. Masayuki Uemoto was a returning CG supervisor alongside Takuma Ishibashi. Shūji Katayama composed the music. CAPSULE perform the theme song and insert songs for the film, including the insert song "Utsusemi."

The first 12-episode season of Knights of Sidonia premiered in Japan in April 2014. The second 12-episode season, titled Knights of Sidonia: Battle for Planet Nine, premiered in April 2015. Netflix streamed both seasons of the anime adaptation after they aired in Japan. Sentai Filmworks released the first season on Blu-ray Disc and DVD in June 2015, and released the second season on Blu-ray Disc and DVD in November 2016.

A theatrical film compiling all 12 episodes of the first season with new sequences and redone sound effects opened in Japan in March 2015, and Sentai Filmworks' release of the second season included the film.

Vertical Comics released all 15 volumes of the original Knights of Sidonia manga in North America.

The manga franchise is getting a game project.