Crunchyroll announced during its panel at the Anime NYC event on Saturday that it will stream the following upcoming anime: Spy×Family, Aoashi, A Couple of Cuckoos, Dance Dance Danseur, The Dawn of the Witch, Shikimori's Not Just a Cutie, the second season of In/Spectre, and Tomodachi Game.

The television anime adaptation of Tatsuya Endō's SPY×FAMILY manga will premiere in 2022.

Takuya Eguchi will star in the anime as Loid Forger. 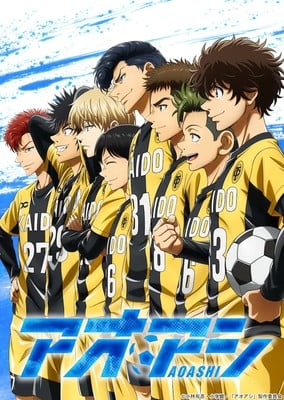 The television anime of Yūgo Kobayashi's Aoashi manga will premiere in April 2022.

The manga centers on third-year middle school student Ashito Aoi, who lives in Ehime prefecture. Ashito has a strong talent in soccer, but he tries to hide it. Due to his very straightforward personality, he causes a disaster that serves as a huge setback for him. Then, Tatsuya Fukuya — a veteran of the strong J-Club team Tokyo City Esperion and coach of the club's youth team — appears in front of Ashito. Tatsuya sees through Ashito and sees his talent, and invites him to try out for the youth team in Tokyo.

Kobayashi launched the manga in Shogakukan's Weekly Big Comic Spirits magazine in January 2015. Shogakukan published the 25th compiled volume on August 30. The manga is based on an original story concept by Naohiko Ueno. The manga was nominated for the 10th Manga Taisho awards in 2017. The manga won the Best General Manga award in the 65th Shogakukan Manga Awards in 2020. 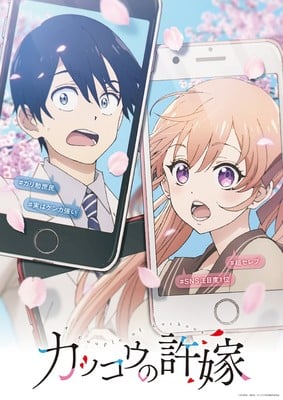 The television anime of Miki Yoshikawa's A Couple of Cuckoos manga will premiere in 2022. The anime will star Kaito Ishikawa as Nagi Umino, Akari Kitō as Erika Amano, Nao Tōyama as Hiro Segawa, and Konomi Kohara as Sachi Umino.

Hiroaki Akagi (Karakai Jōzu no Takagi-san, Those Snow White Notes) is the chief director of the anime and Yoshiyuki Shirahata (episode director for Sleepy Princess in the Demon Castle, Great Pretender) is directing the anime at Shinei Animation and Synergy SP. Yasuhiro Nakanishi (Kaguya-sama: Love is War both seasons, Toilet-Bound Hanako-kun) is overseeing the series scripts, and Aya Takano (Karakai Jōzu no Takagi-san, Polar Bear's Café) is designing the characters.

Yoshikawa (Yamada-kun and the Seven Witches, Yankee-kun to Megane-chan) launched the A Couple of Cuckoos (Kakkō no Iinazuke) manga in Kodansha's Weekly Shōnen Magazine in January 2020. Kodansha published the manga's eighth compiled book volume on September 17. The manga received a novel that shipped on April 14.

Kodansha Comics publishes the manga in English, and it describes the manga:

16-year-old super-studier Nagi Umino, second-year student at the Megurogawa Academy high school, was switched at birth. On his way to a dinner to meet his birth parents, he accidentally meets the brash, outspoken, Erika Amano, who is determined to make Nagi her fake boyfriend as she never wants to actually marry. But once Nagi makes it to dinner, he finds his parents have decided to resolve the hospital switch by conveniently having him marry the daughter his birth parents raised...who turns out to be none other than Erika herself! 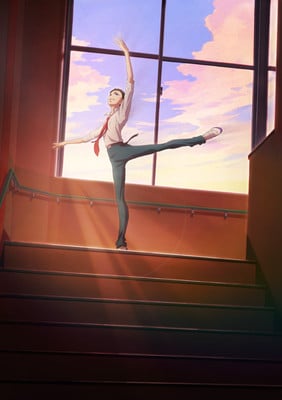 The television anime adaptation of George Asakura's Dance Dance Danseur manga will premiere in 2022. The project marks the first time a manga by Asakura is getting an anime.

Munehisa Sakai (Zombie Land Saga) is directing the anime at MAPPA. Yoshimi Narita (My Senpai Is Annoying, Our love has always been 10 centimeters apart.) is in charge of series composition. Hitomi Hasegawa (Twittering Birds Never Fly: The Clouds Gather animation director) is designing the characters.

The manga centers on Junpei Murao, who was fascinated with ballet as a child, but in his second year of middle school, his father passed away and he decided he needed to become more "masculine," and he gave up on his aspirations. While still having an attachment to ballet, he takes up the martial art of Jeet Kune Do, and becomes popular in his class. Then one day, a new transfer student named Miyako Godai arrives in Junpei's class, and her mother runs a ballet studio. Miyako realizes that Junpei is interested in ballet, and invites him to do ballet together. 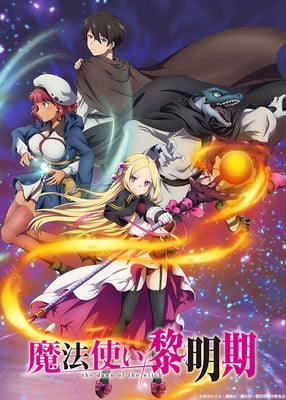 The television anime adaptation of writer Kakeru Kobashiri's The Dawn of the Witch (Mahōtsukai Reimeiki) light novel series will premiere on TBS in April 2022.

Satoshi Kuwabara (The Quintessential Quintuplets, Girlfriend, Girlfriend) is directing the anime and handling series composition at Tezuka Productions. Kobashiri and Mayumi Morita (Black Jack 21) are credited for literature. Reina Iwasaki is designing the characters. Minoru Nishida (Yasuke) is in charge of the art setting, and Yumi Aburaya (Adachi and Shimamura) is handling the color design. Wataru Uchida (Conquest) is in charge of editing. Satoshi Motoyama (The irregular at magic high school) is the sound director, and Bit Grooove Promotion is the sound producer. Kobashiri is credited with the original work. Light novel illustrator Takashi Iwasaki is credited for the original character design.

The light novel series is set in the same fantasy world as Kobashiri's (Grimoire of Zero) Zero Kara Hajimeru Mahō no Sho light novel series, now at peace after having endured a conflict between the church and witches for 500 years. However, embers of war still burn in some regions of the world. The story centers on Cervil, a hopeless student at the Kingdom of Wenias' College of Magic. Cervil has somehow lost all memory of his time before attending the college. The school's headmaster Albus sends him for special training to the southern part of the continent, where persecution against witches runs strong. 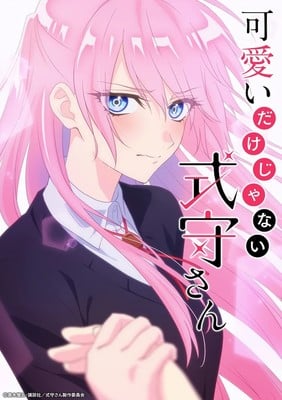 Ryota Itoh (My Senpai Is Annoying) is directing the anime at Doga Kobo with Shōhei Yamanaka as assistant director. Yoshimi Narita (HappinessCharge PreCure!, Our love has always been 10 centimeters apart., My Senpai Is Annoying) is in charge of the series scripts. Ai Kikuchi (Engaged to the Unidentified, New Game!, How Heavy Are the Dumbbells You Lift?) is designing the characters.

Shikimori seems like the perfect girlfriend: cute, fun to be around, sweet when she wants to be... but she has a cool dark side that comes out under the right circumstances. And her boyfriend Izumi loves to be around when that happens! A fun and funny high school romance with a sassy twist perfect for fans of Nagatoro-san and Komi Can't Communicate! 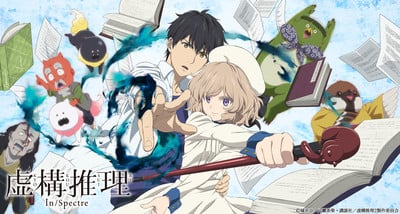 The second season of the television anime of Kyo Shirodaira and Chasiba Katase's In/Spectre (Kyokō Suiri or Invented Interface) manga will premiere in 2022.

Kodansha Comics is publishing the manga in English, and it describes the supernatural mystery romance:

When she was still just a girl, Kotoko was kidnapped by yokai. These spirits made her into a powerful intermediary between the spirit and human worlds, but this power came at a price: an eye and a leg. Now, years later, she watches out for dangerous yokai while developing feelings for a young man named Kuro, who is also special: an incident with a yokai has given him healing powers. He's surprised when Kotoko asks him to team up to handle renegade yokai, preserving the thin line between reality and the supernatural.

Katase launched the manga based on a 2011 novel by Shirodaira (Spiral, The Record of a Fallen Vampire, Blast of Tempest) in Kodansha's Shōnen Magazine R in April 2015. The manga's 16th compiled book volume will ship on December 16. 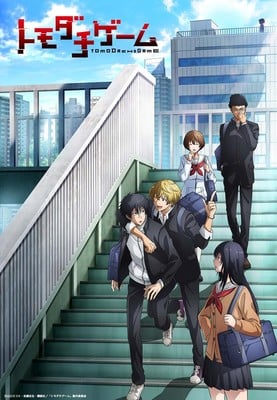 Hirofumi Ogura (Cells at Work!, Black Butler II) is directing the anime at Okuru to Noboru, and Kenta Ihara (Saga of Tanya the Evil, Tsukimichi -Moonlit Fantasy-) is supervising and writing the series scripts. Satomi Miyazaki is designing the characters. Studio Tulip's Si Man Wei (Edens Zero) is the art director, while Studio Tulip's Tsukasa Ohira (No Game, No Life) is in charge of art setting. Aiko Mizuno (Cells at Work!) is the color key artist. Yomogiko Murano (Attack on Titan The Final Season, Kono Oto Tomare!: Sounds of Life) is the compositing director of photography. MICHIRU (BEM, Ascendance of a Bookworm) is composing the music. Hiroto Morishita (Higurashi: When They Cry – GOU) is directing the sound at Studio Mouse.

The story, based on Mikoto Yamaguchi's original concept, centers on Yūichi Katagiri, a young man with a perfect student life who has four friends with difficult lives. His peaceful daily life comes to an end when 2 million yen (about US$20,000) in school trip fees goes missing. Riddles unfold as Yūichi gets caught up in a mysterious game for money and must decide whether friendship or money matters more.

Sato (Sherlock Bones, Yokai Doctor) launched the manga in Kodansha's Bessatsu Shōnen Magazine in December 2013. The manga went on hiatus in December 2019, returned for one chapter in February 2020, and then went back on hiatus. The manga entered its final arc in August 2020.

The manga has inspired two live-action films. The first film, Tomodachi Game Gekijōban, opened in June 2017 after a live-action television drama series premiered in April 2017. The second film screened in Japan in September 2017.