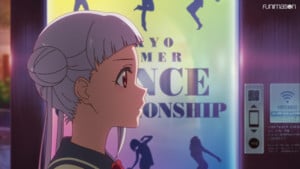 The universal sign that things are getting serious in a Love Live! show is when you have a dedicated two-parter. It's a little surprising to see one this early in the season, but considering this is all about unpacking Chi-chan and Kanon's complicated feelings about whether or not the former will join in the School Idol way of life, it makes sense to put it here. Though so far the actual meat of this conflict hasn't made itself apparent, as both central characters are the types to quietly let their feelings bottle up rather than express them right away. So in the meantime Superstar delivers an episode filled to the brim with shenanigans. Which is easy when this season's established Big Name Idols waltz in and invite their competition to a friendly concert on their private island. Like yes, I know it's supposed to just be the island the Sunny Passion girls grew up on, but when you say “our island” all I can think of is that School Idols have made their own version of Fyre Festival.

I really do want to highlight just how much comedy is packed into this episode, in big and little ways. The most apparent is the quickly developing rivalry/friendship between Keke and Sumire as they compete from different ends of the Idol Worship spectrum. Keke is of course a hardline Idol Evangelical, looking to spread the Good News with every fiber of her being. Sumire is pure mercenary, with School Idolatry just being her particular means of becoming the queen of show business. Those attitudes are destined to clash, and most of this episode is just seeing them take jabs at each other in some of the most passive-aggressive ship-teasing you'll ever see. It's a smart move, honestly, as their opposing personalities provide a ton of big and small goofs, while giving Kanon the chance to act as the adult or leave them to their own devices when she's busy with other things. And the writing takes care to not make them too antagonistic, as there's always a sense they're still friends looking out for each other regardless. It's just that sometimes friends get on each other's nerves, or it can just be fun to spur each other into petty competition, and it certainly makes for fun television.

Then there's the little things – the tiny flourishes or extra steps or background gags that all pile up to make nearly every scene in this episode rewatchable. Some of it is just really good animation polish, like the way characters' eyes and bodies move to complement the already strong expressions. Some of it is jokes that are left unspoken but evident if you're paying attention, like Keke bringing her Sunny Passion portrait to their training session, implying they all stopped off at her apartment on the way and she carried it all the way to Sumire's home. And some of it's just fundamentally good character animation that never draws attention to itself, like the way Kanon bends her knees and leans back before plopping back on the beach, or the sheer number of unusual or difficult shot compositions that are used for one or two gags. On their own these are all tiny elements that wouldn't mean much in isolation, but together they present an attention to detail that really makes “Passion Island” engaging to watch, even as the actual character conflict stews under the surface.

Which does make sense – Chi-chan and Kanon are decidedly more reserved than the other two, and predictably don't come out and say what they're feeling nearly as quickly. But that doesn't prevent those segments of this episode from feeling frustrating. We know bits and pieces about their relationship as kids, and can infer a lot based on how they behave, but there's a sense that we're missing an important part of the story for why Chi-chan chose dance as her passion in the first place and why she's now wavering between pursuing it and possibly joining her friend in Idolatry. It's interesting to see Kanon so pensive while trying to figure out her friend, and this will no doubt all come together next episode, but it makes this episode feel decidedly lighter than I'd like.

Especially since we're going to be waiting extra long for the second half. It seems the Olympics still aren't satisfied taking everything I love away from me, so it'll be September when we finally get to episode six. I suppose it's always a good idea to leave the audience wanting more, but boy do I hope the resolution is worth all this waiting.