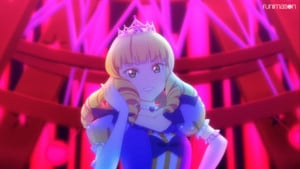 If there's a four-word phrase more terrifying than “Love Live! rap song” I don't know it.

Listen, this franchise can do a lot of things very well. And with the sheer amount of singles, B-sides, and promo EPs that get put out for the larger franchise there are at least a few non-pop Love Live! songs that have turned out genuinely good. “Strawberry Trapper” kicks ass – just listen to that bass line. And I acknowledge that for a number of reasons the Japanese hip-hop scene is vastly different in style and image from the US scene I'm familiar with. But none of that erases the fact that seeing this image sent a shiver of pure fear down my spine at what it foreshadowed for the rest of the episode. I sat through a whole season of Hypnosis Mic, and I'm not strong enough to do that again.

Thankfully, “Check it Out” only has one scene of Liella doing their best imitation of an edutainment rap, quickly establishing that none of these girls could rap their way out of a paper bag. Sumire's bars aren't anything amazing, but she's able to deliver them without embarrassing herself, so she's selected as the Center for the rap-themed prelim qualifiers. You'd think that would have Ms. Showbiz walking on air, but in fact Sumire was always the dog chasing the car, and now that she's caught it, the girl has no clue what to do with it.

Honestly, this was the episode I'd been waiting for since Sumire first joined the group. I appreciate idol gremlins in all forms, but her story in particular has always carried some sadness that was always hiding in the background of her constant bickering with Keke. Sumire wants to be top dog, and has worked damn hard for it across most of her life, but never quite gotten there. So now that she has, at least temporarily, gotten the position and recognition she's wanted, she's terrified of not rising to the occasion.

What follows is a remarkably believable portrayal of impostor syndrome, as the Galaxy Girl ping-pongs wildly between the elation of being center and the sinking pit in her stomach that insists she's going to blow it. When you want something with all your heart, the chance of failing (again) can be petrifying, and it's easy to convince yourself to give up before you try, because resignation is still a modicum less painful than failure. And it's a vicious spiral: self-doubt leads to hesitancy, hesitating weakens performance, and that performance invites scrutiny that further chips away at confidence. This is still Love Live!, so there are some cheery jokes to keep things from getting too heavy, but it's an incredibly relatable exploration of how repeated failure can condition a person to give up before they try.

Then there's Keke. Girl's been the biggest opponent to all things Sumire for half the episode count, but watching her frenemy struggle with her own brain, even our School Idol ambassador has to give her respect. And it's adorable to see her still trying to not seem nice about it – i-it's not like she made that special princess outfit because she likes her or anything, isopod! More importantly we confirm what I'd suspected for a while, that Keke's stay in Japan is contingent on actually showing results for her overseas idol adventure, which all but guarantees some drama in our closing episodes. Here and now though, Keke refuses to use that as excuse or justification in Sumire trying to give up and play it safe. The entire scene with her presenting the tiara is Grade-A Love Live! shmaltz that I can't get enough of. With her friends behind her, Sumire can admit just how much she still wants the glamour and fame she's failed to achieve, and reach out one more time for it, regardless of the risk she might get hurt.

As for the song itself – honestly, it should get Liella disqualified. It's a fine song, possibly my favorite bop from this season so far, but the assignment was to perform a rap, and Sumire just barely sing-talking a measly 8 bars doesn't cut it as far as I'm concerned. I'm not saying I wanted to hear these girls try to rap, and I'm grateful to the anime gods we at least avoided any Iggy Azalea-esque nonsense, but this is more swing revival than actual rap. Some songs can toe a line like that well , but this one feels like a cop out. Also, while Sumire looks great with the ojou-sama hair, I really have to question who heard “rap” and thought “this calls for matching princess dresses. Really, this entire musical number is aesthetic chaos.

Genre nitpicks aside, this is a far more solid dramatic episode of Superstar that offers much-needed depth and sympathy to Sumire and her relationship with Keke. The pair's dueling personalities have been fun, and I hope that element remains in some form moving forward, but the characters and show are much better off being treated with the same sympathy that's been offered to the rest of the group, and I'm glad they finally have it.