The NAACP announced nominees for the 53rd NAACP Image Awards, and it revealed that LeSean Thomas and MAPPA's Yasuke anime has been nomimated for Oustanding Animated Series. The NAACP Image Awards will take place on February 26 at 8:00 p.m. EST on BET.

The France-Luxembourg animated film of Jiro Taniguchi's The Summit of the Gods (Kamigami no Itadaki) manga won in the Best Animation Film category at France's Lumières International Press Awards.

The Yasuke anime debuted in April 2021 worldwide on Netflix.

In a war-torn feudal Japan filled with mechs and magic, the greatest ronin never known, Yasuke, struggles to maintain a peaceful existence after a past life of violence. But when a local village becomes the center of social upheaval between warring daimyo, Yasuke must take up his sword and transport a mysterious child who is the target of dark forces and bloodthirsty warlords. The story of Yasuke, the first African samurai who actually served the legendary Oda Nobunaga, will be released to the world.

The story's protagonist is based on the historical figure Yasuke, a samurai of African origin who served under Oda Nobunaga during Japan's Warring States period in the 16th century. 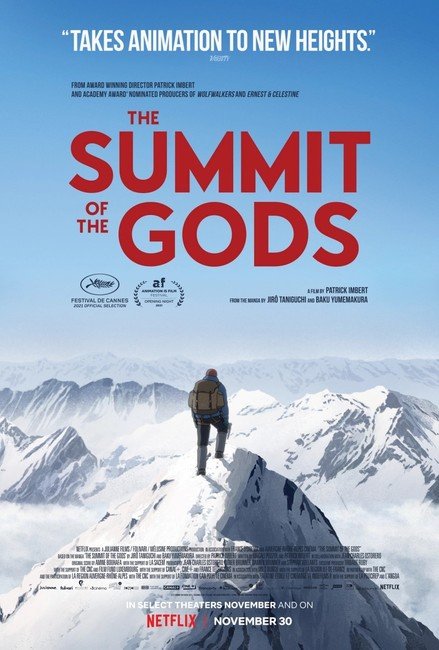 The film screened in July at the Cannes Film Festival as part of the Official Selection, and opened in theaters in France on September 22 under the title Le Sommet des dieux. The film also opened the Animation Is Film Festival in Los Angeles on October 22.

Patrick Imbert (Ernest & Celestine) directed the film, and Magali Pouzol and Imbert wrote the script with Jean-Charles Ostorero collaborating. David Coquard-Dassault (Peripheria) was the film's art director. Amine Bouhafa composed the music. Diaphana Distribution is distributing the film in France, while Wild Bunch International has the international rights. Didier Brunner (The Triplets of Belleville, Kirikou and the Sorceress) is producing the film. Cartoon Brew describes the film as a 2D/3D hybrid.

The manga is itself an adaptation of Baku Yumemakura's novel. The story follows Fukamachi, an avid wilderness photographer who discovers a link to the past in Kathmandu, Nepal. He finds a camera supposedly belonging to George Mallory, a mountaineer who went missing on Mt. Everest. After meeting Joji Habu, a well-known climber with a passionate drive for the mountain, the two set off to uncover a piece of lost history.

The series ran in Shueisha's Business Jump, and European company Fanfare / Ponent Mon publishes the manga in English. Taniguchi passed away on February 11, 2017.