Riku is arguably the most mysterious character in Yashahime, and his true intentions continue to elude fans in Season 2. In the latest episode of the hit series, Riku claims he's going to do whatever he pleases from now on – but no one knows exactly what it is he wants. With unclear goals and motivations, Episode 26 of Yashahime continues to cast doubt on this untrustworthy and unpredictable character.

In Yashahime Season 1, Riku is first introduced as a pirate who happens to run into Towa and immediately befriends her. While he seems flirtatious and kind toward her, the series reveals a secretive and intense side to Riku. He notably breaks the fourth wall in Season 1 to tell viewers what happened when the Grim Comet threatened the world. Riku's the one who warns the pregnant Kagome about the comet, explaining that Inuyasha and Sesshōmaru must work together to destroy it. He also admits that Kirinmaru wants to kill the three half-demon princesses, which gives Kagome and Inuyasha time to prepare for the hostile event.

Riku's role in the series got murkier as Season 1 progressed when it was revealed that he's the one paying Moroha to kill demons. His sadistic and sociopathic side is exposed when he's fascinated by love because he can't understand it, stating that you should kill someone you truly love. However, his feelings seem to grow stronger toward Towa despite stealing her silver Rainbow Pearl after their date. While Season 1 ends with Riku gathering all the Rainbow Pearls for Zero, his beloved master, Riku actively tried to protect both Towa and Setsuna from Kirinmaru despite once serving him. 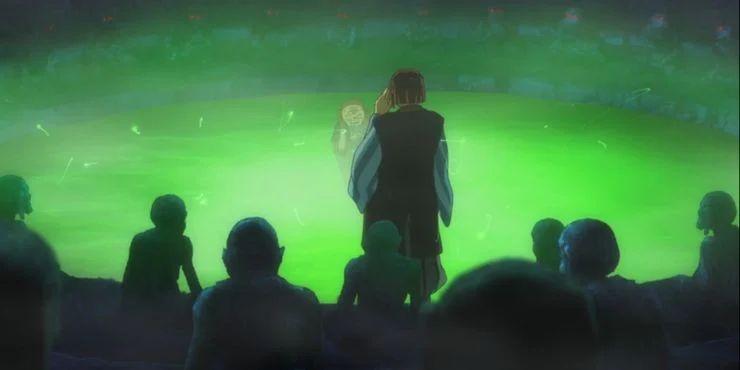 Given Riku's unpredictable behavior and hidden feelings throughout Season 1, his true intentions are as mysterious as ever in his first appearance in Season 2 of Yashahime. In the opening scene of Episode 26, Riku visits Mimisenri after he heard rumors that Riku betrayed Kirinmaru. After Riku admits that the rumors are correct, Mimisenri warns him that he can't escape Kirinmaru if he seeks revenge. The calm and confident Riku claims he won't run from Kirinmaru while he enjoys his newfound freedom. While Riku vaguely declares he'll do whatever he pleases from now on, fans are left wondering what exactly it is this entails.

Mimisenri assumes that Riku wants to get involved with Sesshōmaru's twin daughters and warns against the dangers of interfering, but Riku reveals that he's once again set on collecting all of the Rainbow Pearls. However, Riku doesn't reveal why he wants to collect the Rainbow Pearls this time around, which leaves several possibilities open. While he may simply want to collect them all for Zero again, he may have an ulterior motive to return the pearls to the half-demon princesses he once betrayed. His intentions become more unclear when he shows up at the end of Episode 26 to intervene in the battle between the half-demon princesses and the sea demon, saving Towa's life from the shadows.

While Riku claims that his objective is to find the Rainbow Pearls once again, the reason behind his mission continues to evade viewers. Despite his mysterious and dark persona, his actions reveal an inexplicable connection to the half-demon protagonists, especially Towa. Viewers will have to follow Yashahime Season 2 to unravel the true intentions of the show's most mysterious character.