Kyoto Animation began streaming a teaser trailer for the upcoming film for its Tsurune (Tsurune: Kazemai Kōkō Kyūdō-bu) anime franchise on Tuesday. The video reveals that the film is titled Gekijōban Tsurune: Hajimari no Issha (Tsurune The Movie: The Beginning Arrow), and it will open in Japan on August 19.

The video also confirms the film's staff. Takuya Yamamura is returning to direct the film at Kyoto Animation. Yamamura is also writing the script, with supervision by the television anime's scriptwriter Michiko Yokote. Miku Kadowaki is returning as character designer. Masaru Yokoyama (new Fruits Basket anime, Your Lie in April) is replacing Harumi Fuuki as the composer. 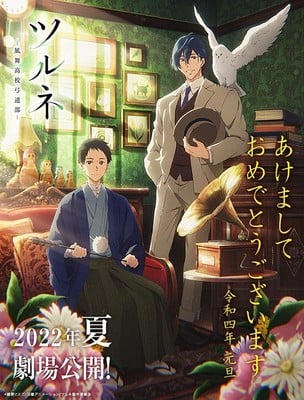 The story opens with Minato Narumiya beginning his freshman year at the local Kazemai High School.
Mr. Tommy, advisor to the Japanese archery Club, is keen to recruit Minato, as well as his childhood friends Seiya Takehaya and Ryohei Yamanouchi. Ryohei convinces the reluctant Minato to attend the Club's orientation, where he also meets Kaito Onogi and Nanao Kisaragi.
Singling Minato out, Mr. Tommy introduces him as a rare Japanese archery talent and asks him to demonstrate in front of everyone. However, Minato's arrow fails to hit the mark because he is afflicted by a serious condition… Minato, Seiya, Ryohei, Nanao and Kaito.
Japanese archery brings them together. What will they attain as they struggle through their beautiful, yet “bitter” youth?

The anime is based on Kotoko Ayano's novel of the same name.