The Demon Sword Master of Excalibur Academy Novels Get Anime

Kadokawa revealed in its new promotional video for Yū Shimizu and Asagi Tōsaka's The Demon Sword Master of Excalibur Academy (Seiken Gakuin no Maken Tsukai) light novels on Thursday that the novels are inspiring an anime. The announcement did not reveal any further details. Saki Miyashita narrates the below video. 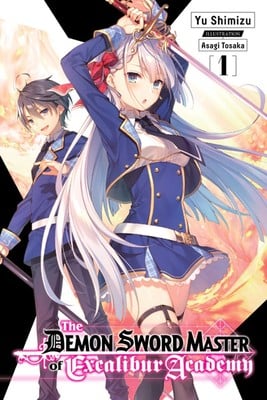 Yen Press is publishing the light novels in English, and it describes the story:

Awakening from magical stasis after a thousand years, the Dark Lord Leonis suddenly finds himself in the body of a ten-year-old boy! He quickly meets Riselia, a girl confronting the Voids, creatures that have nearly exterminated humanity. Determined to uncover the mysteries of this strange new era, Leonis enrolls in Excalibur Academy, a school that trains students to fight back against these enigmatic monsters. Could the Voids hold some connection to Leonis's past?

Asuka Keigen launched a manga adaptation of the novels in Kadokawa's Shōnen Ace magazine in November 2019. Kadokawa will publish the manga's fourth volume on October 26.

Shimizu launched the Blade Dance of Elementalers (Seirei Tsukai no Blade Dance) light novel series in 2010, and ended the series with its 20th volume in March 2019. Artist Issei Hyōju (MM!) drew the manga adaptation in Media Factory's Monthly Comic Alive magazine from 2012 to January 2017. The light novel series inspired a television anime in 2014.