The Dawn of the Witch TV Anime Premieres in April 2022

The official Twitter account for Kodansha's Magapoke app revealed on Tuesday that the anime adaptation of writer Kakeru Kobashiri's The Dawn of the Witch (Mahōtsukai Reimeiki) light novel series will premiere in April 2022.

The light novel series is set in the same fantasy world as Kobashiri's (Grimoire of Zero) Zero Kara Hajimeru Mahō no Sho light novel series, now at peace after having endured a conflict between the church and witches for 500 years. However, embers of war still burn in some regions of the world. The story centers on Savil, a hopeless student at the Kingdom of Wenias' College of Magic. Savil has somehow lost all memory of his time before attending the college. The school's headmaster Albus sends him for special training to the southern part of the continent, where persecution against witches runs strong. 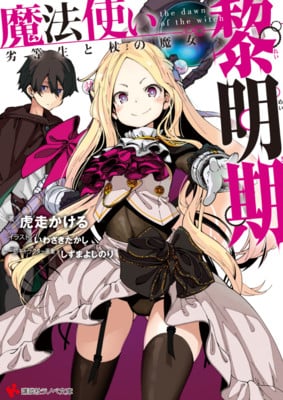 The novels are inspring an ongoing manga by Tatsuwo that launched in Kodansha's Monthly Shonen Sirius magazine in July 2019. Kodansha published the manga's fourth volume on October 7. Kodansha Comics publishes the manga digitally, and it released the third volume on July 17.