The staff of Gekijōban Karakai Jōzu no Takagi-san, the Teasing Master Takagi-san franchise's upcoming anime film, revealed on Thursday that the film will have four different bonuses for moviegoers over its first four weeks. The first week's bonus is a 68-page booklet with exclusive manga content by original manga creator Sōichirō Yamamoto.

The "Volume Film" booklet will include a "rewritten" version of the manga's first chapter "Eraser," and a new chapter titled "Ashita Kara" (Starting Tomorrow) that is inspired by a scene from the film. The booklet also includes a question-and-answer section with Yamamoto, personal information about Yamamoto, production materials for the characters, comments by the cast, and a section looking back on the television series. 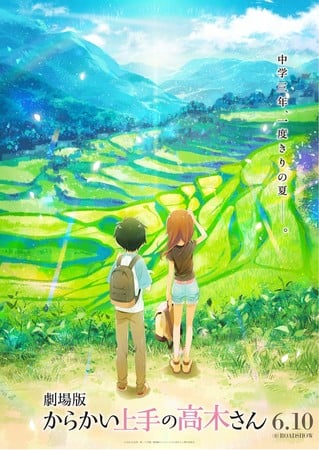 The film will open in Japan on June 10. In the film's story, Takagi and Nishikata are in their final year of middle school, and have both anxiety and hope for the future. During the summer of their final year, on the day before summer vacation starts, the two find a kitten that they name Hana. They decide to take care of the kitten themselves until they can find its mother. Inori Minase plays Hana, and Haruka Tomatsu plays a pet shop employee named Ōta.

The main staff from the anime's third season will return for the film. Hiroaki Akagi is directing the film at Shin-Ei Animation, while Hiroko Fukuda is credited for composition, as well as penning the script alongside fellow third season scriptwriters Aki Itami and Kanichi Katou. Aya Takano is once again designing the characters. Hiroaki Tsutsumi returns from previous seasons to compose the music. Yuiko Ōhara will perform the theme song "Hajimari no Natsu" (The Beginning of Summer).

The first television anime based on the manga premiered within the "Anime no Me" programming block in January 2018, and it also adapted Yamamoto's Ashita wa Doyōbi manga as segments within the show. Crunchyroll streamed the anime as it aired in Japan, and Funimation streamed the series with an English dub. The second television anime season premiered in July 2019. The season debuted on Netflix in December 2019.

Tired of being mercilessly teased by his classmate Takagi, Nishikata has vowed to get her back and successfully tease the girl that's made him blush countless times. After all, if you blush, you lose! But getting vengeance isn't so easy when every attempt blows up in his face. Will Nishikata ever make Takagi blush or will he gain something more fulfilling from his bumbling attempts?

Yen Press is releasing the manga in English.

Karakai Jōzu no Takagi-san VR 1&2 Gakki (Teasing Master Takagi-san VR 1st and 2nd Semester), an expanded version of the virtual reality (VR) anime of the manga, launched for the Oculus Quest in December 2020. A new smartphone game for the franchise was slated to launch on March 25, but is now indefinitely delayed.