Introducing Sing a Bit of Harmony at the 2021 Scotland Loves Animation film festival -- where it got its international premiere ahead of Japan -- organizer and panelist Jonathon Clements sums it up as, "Glee meets Ghost in the Shell." And honestly, as unlikely as it sounds, those six words are about as perfect of a logline as you could get for the film. They also sound like an unholy union of far too much suspended disbelief, and the balance the film strikes between realism and absurdity could have overspilled, fatally, into the latter at any point during its runtime. Amazingly, it never does, resulting in perhaps what is destined to be one of the year's most surprising anime film hits.

Co-produced by Funimation and J.C Staff and directed by Yasuhiro Yoshiura, Sing a Bit of Harmony takes place in a slightly futuristic Japanese town, in which a lot of the adult population work at a cutting-edge computing corporation. Unlike sci-fi's usual brand of mechanical dystopia, this is a world filled with the benign helper A.I, as seen before things start going awry in I, Robot. This includes the even more cutting-edge Shion, a robot designed to be indistinguishable from a teenage girl, tasked with blending in among her human peers at a local high school. She's the brainchild of a workaholic single mom whose daughter, Satomi, attends the same high school.

When Satomi inadvertently finds out about her mother's pet project, as well as her strange mission to "make Satomi happy," she tries to keep Shion's inorganic status a secret so as not to jeopardize her mom's career. (Sending an untested piece of advanced robotics to live, unsupervised, among a bunch of kids is a big ethical and legal no-no.) However, it's not long until a group of Satomi's classmates find out the truth. Swearing them to secrecy sets the stage for a quirky, high school dramedy that takes a sudden turn into a Die Hard-esque tower block caper in its third act. And that's not even touching on the fact that Shion constantly breaks out into spontaneous singing.

Once again, Sing a Bit of Harmony, on paper, should not work. So why does it, then? Other than some very handsome animation from J.C Staff (Hidekazu Shimamura serves as animation director and Shuichi Shimamura on character designs), the secret lies in Yoshiura and Ichirō Ōkouchi's whip-smart and effective script. The most important thing Sing a Bit of Harmony needed to do was lampshade the absurdities of its own premise, which it does with comedic aplomb through its teen cast's observations and interactions with one another. Teen anime dramas are absolutely rife with clichéd and melodramatic writing. The dialogue here sounds reasonably close to what you'd expect actual teenagers to say in these situations and garners plenty of laugh out loud moments. 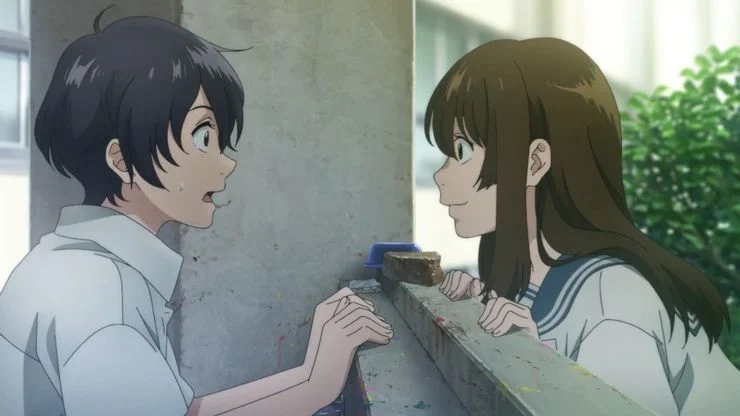 Also important, particularly for a musical, is having plenty of heart. As the English title hints at, Shion uses her singing skills (toe-tapping numbers penned by Yohei Matsui) to harmonize jarring interpersonal relationships between humans. But in a Rebecca-like way, Satomi -- the one person she wants to make the happiest -- always redirects this energy onto her friends rather than herself. This becomes the basis of the film's emotional component, with the riddle of Satomi's elusive happiness both compounded and teased out by Shion being an idealized realization of everything Satomi clearly wishes she could be, like an overachieving sibling.

In doing all this, Sing a Bit of Harmony also taps into its core sci-fi credentials. And while it doesn't quite go as philosophically deep as the aforementioned Ghost in the Shell, it is an interesting examination of how we form attachments to artificial objects and how those objects, in turn, might evolve to reciprocate. Idealistic AI stories being few and far between, Sing a Bit of Harmony makes an interesting companion piece with Mamoru Hosoda's Belle, which also screened at the festival and has a similarly positive outlook on technology. While Belle may end up taking home an Oscar next year, Sing a Bit of Harmony took home the Audience Award in Scotland, making it a bonafide crowdpleaser.