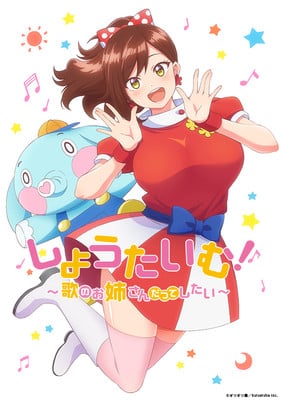 Unlike many of the previous AnimeFesta projects, the main cast is the same for both the "on-air version" and the more explicit "premium version" of the anime.

The story of Showtime! ~Uta no O-nee-san Datte Shitai~ begins when Shōji Fujimoto, a widowed single father who aspires to be a picture book author, encounters Minami Takasaki, a singing idol on the children's educational show O-nee-san to Uta-ou! (Let's Sing Along With Our Songstress!), outside work. As a television idol for children, Minami is lonely in her private life and is not allowed to fall in love. Any scandals are absolutely prohibited. Thus begins an adult love story with a songstress.

Saburou Miura (My Matchmaking Partner is a Student, An Aggressive Troublemaker) directed and wrote the scripts for the anime at Rabbit Gate. Kenichi Hamazaki designed the characters, and LAZZ was the chief animation director.

Suiseisha published the manga in print on September 21. Girigiri also released the manga under the different title Uta no O-nee-san Datte H Shitai ~Konna Kao, TV no Mae no Minna niwa Miserarenai yo.