Netflix revealed the English dub cast and an updated story synopsis on Monday for Bright: Samurai Soul, its new anime film based on the 2017 Bright live-action film that starred Will Smith and Joel Edgerton. The English dub cast features Simu Liu (Shang-Chi and the Legend of the Ten Rings, Star Wars: Visions) as Izo, Fred Mancuso as Raiden, and Yuzu Harada as Sonya. 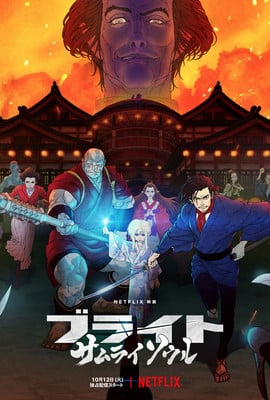 The updated synopsis is as follows:

"In the time between the fall of the Shogunate and the rise of the Meiji era, a powerful bright light emitted from a wand brings an end to the long Shogunate period to avoid further bloodshed as Japan begins to shift toward a new era. Amid these circumstances, a one-eyed wandering ronin named Izou, who has lost his reason to live, and Raiden, an orc who detests murder and hopes to leave a life of thievery behind, separately meet a young elf girl named Sonya around the same time. Together, they go on a journey along the Tokaido road to bring her and the wand she holds safely to the land of the elves in the north. Standing in their path is the mysterious organization Inferni, which aims to obtain the wand and revive the Dark Lord, who intends to rule all of creation. Inferni also uses the new Meiji government in its attempt to steal the wand from Izou, Raiden and Sonya. Traveling along the Tokaido road from Kyoto to Yokohama, Izou and Raiden begin their journey to protect the wand."

The film will debut on Netflix on October 12.

Yūki Nomura — a Kyōgen stage actor — will make his voice actor debut in the film in the Japanese dub, starring as Izo the ronin. Daisuke Hirakawa will play the orc Raiden, and Shion Wakayama will pay the elf Sonya.