Rurouni Kenshin Saishūshō The Final, the first of two "final chapter" films in the live-action film series based on Nobuhiro Watsuki's Rurouni Kenshin manga, dropped from #3 to #4 in its fifth weekend. The film earned 118,573,820 yen (about US$1.09 million) from Friday to Sunday. The film has sold a total of 2.08 million tickets, and has earned a cumulative total of 2,918,920,440 yen (about US$26.84 million).

The film ranked at #2 and earned 745 million yen (about US$6.9 million) in its opening weekend.

The film opened in Japan on April 23. Rurouni Kenshin Saishūshō The Beginning, the second film, will open on June 4.

The films were originally slated to open on July 3 and August 7 last year, but were delayed to this year due the ongoing COVID-19 pandemic.

Rurouni Kenshin Saishūshō The Final has an original story that differs from the story in the manga. The film centers on the story from the manga's "Jinchū" arc, which features Kenshin's conflict with the mysterious weapons dealer Enishi. Rurouni Kenshin Saishūshō The Beginning will tell the story of how Kenshin got his cross-shaped scar. Kasumi Arimura will play the character Tomoe Yukishiro in the films. Tomoe was Kenshin's wife during his days as the assassin Battōsai, and her story ties into Kenshin's iconic X-shaped scar. Kenshin and Tomoe's relationship was previously portrayed in the Rurouni Kenshin: Trust & Betrayal original video anime (OVA) project.

Keishi Ōtomo is returning to direct the films. The rock band ONE OK ROCK returns to perform the theme song "Renegade" for the films. 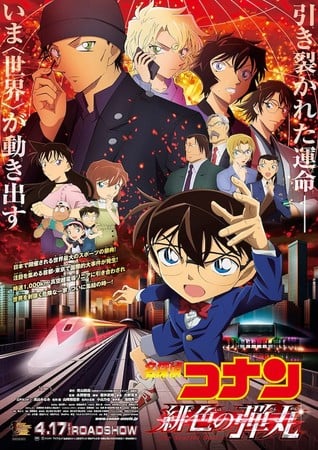 Detective Conan: The Scarlet Bullet is the 24th film in the franchise. The film was slated to open on April 17 last year, but was delayed from its original date due to concerns about the new coronavirus disease (COVID-19). The film opened in Japan on April 16. The film also had a simultaneous release in 22 countries and territories outside of Japan: Taiwan, Hong Kong, South Korea, Singapore, Malaysia, Indonesia, the Philippines, Brunei, Thailand, Vietnam, Germany, Austria, Switzerland, Lichtenstein, Luxembourg, the United Arab Emirates, Oman, Kuwait, Bahrain, Qatar, Saudi Arabia, and France. 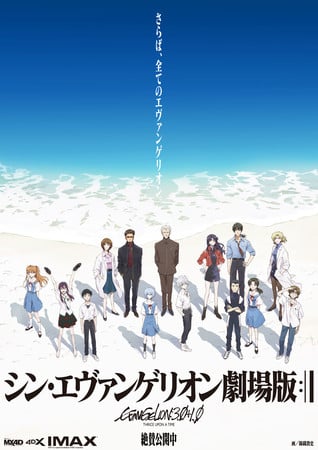 In its third week, the film surpassed the domestic earnings of Evangelion: 3.0 You Can (Not) Redo, which earned a total of 5.3 billion yen. The new film is now the highest-earning film in the series domestically and internationally.

The film ranked #1 in its opening weekend. The film sold 2,194,533 tickets for 3,338,422,400 yen (about US$30.6 million) in its first seven days in 466 theaters in Japan. The film sold 33.6% more tickets for 45.1% more yen than the previous Evangelion film during their respective first seven days. The film earned the equivalent of US$3.4 million in 38 IMAX theaters during its first seven days— the second-highest opening week for IMAX screenings of a domestic title in Japan, behind only last year's Demon Slayer – Kimetsu no Yaiba – The Movie: Mugen Train. Evangelion: 3.0+1.0 also played in 82 theaters equipped for 4D screenings.

The staff had delayed the film from January 23 to March 8, after careful consideration due to the new state of emergency declared in four prefectures in Japan on January 8, and then extended to a total of 11 prefectures. The film had an earlier delay due to concerns over COVID-19 and its spread inside and outside of Japan. The film was originally scheduled to open in Japan on June 27, 2020. 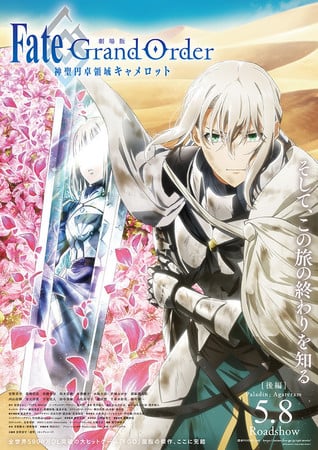 Paladin: Agateram, the second film in the Fate/Grand Order The Movie Divine Realm of the Round Table: Camelot (Fate/Grand Order Shinsei Entaku Ryōiki Camelot) film project, dropped from #5 to #7 in its second weekend. The film earned 28,300,600 yen (about US$260,300) from Friday to Sunday, and has earned a cumulative total of 122,451,700 yen (about US$1.12 million).

The film ranked at #5 in its opening weekend.

The film was slated to open on May 8, but was delayed by one week for a May 15 opening due to COVID-19 and the state of emergency declared in four prefectures.

The first film, Wandering: Agateram, opened on December 5. The first film had been delayed from its August 15 opening, due to the effects of COVID-19 on its production. 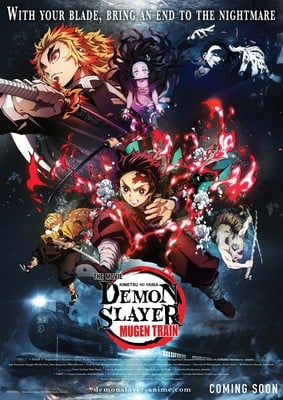 After 12 consecutive weeks at #1 in the box office in Japan, Demon Slayer – Kimetsu no Yaiba – The Movie: Mugen Train dropped to #2 during the January 9-10 weekend, its 13th weekend. The film had ranked in the top three spots weekly in Japan since then, until its 22nd weekend.

The main staff members of the previous television anime returned for the sequel film. TOHO and Aniplex are handling the film's distribution in Japan. Funimation and Aniplex of America began screening the film in theaters in North America on April 23, and will release the film digitally on June 22.

Kadokawa's 4K HDR screening of the 1999 Gamera 3: Revenge of Iris (Gamera 3: Iris Kakusei) film rose from #2 to #1 in the mini-theater ranking in its sixth weekend.