Ribenjiya is credited with the original work. Shochiku, Ajiado, and Nitroplus are credited with the show's planning. Masaya Fujimori (Kemono Jihen, Izetta: The Last Witch, Fairy Tail the Movie: Phoenix Priestess) is directing the anime at Ajiado. Nitroplus' Gen Urobuchi (Madoka Magica, Fate/Zero) is the original storywriter, and is also in charge of series scripts. Urobuchi is also writing the scripts alongside Nitroplus' Renji Ōki (Azure Lane, Bubble). Jiro Suzuki and Yuushi designed the characters, and Yuji Hosogoe is adapting those designs for animation. Hosogoe is also the chief animation director alongside Yuki Nishioka and Emiko Endo. Jun Futamata is composing the music.

Additionally, Hotaka Okamoto is the art director, Naomi Nakano is the color designer, Teppei Satō is the director of photography, and Akiko Fujita is the sound director. 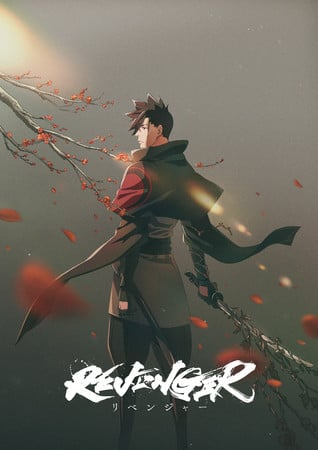 The anime will have an advance screening event on December 10.

The "dark hero action" anime centers on Raizo Kurima, a man who was betrayed by someone he trusted, and now he has no place to return. He is now a hitman working for the organization Revenger, which takes revenge on behalf those who have no power. He works at the "Ribenjiya" store that acts as a general store on the outside, while hiding the Revenger organization beneath the surface. His coworkers include a physician with destructive impulses, a beautiful and androgynous young man who is both cruel and innocent, a gambler who loves money and alcohol, and an intelligent lacquer craftsman. The five men start to build a strange friendship through working together.

Crunchyroll will stream the anime worldwide except in Asia.