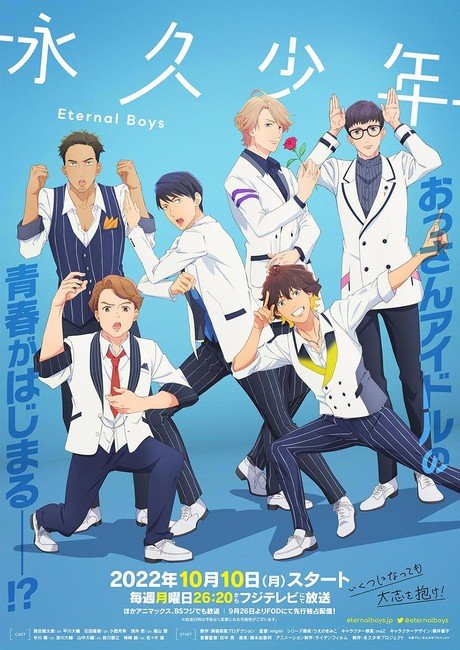 The anime will premiere on Fuji TV on October 10 at 2:20 a.m. (effectively, October 11). The series will then air on Animax and BS Fuji. The anime will stream early on FOD on September 26.

The anime will get an advanced screening of the first four episodes in Tokyo on September 17. Cast members will be in attendance. 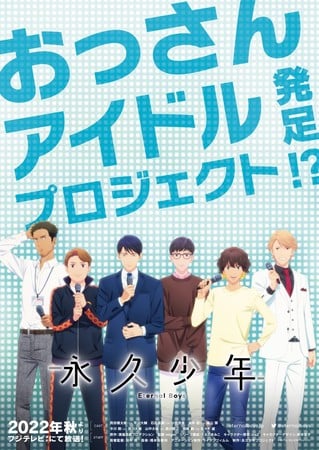 The story centers around the Manpuku Geinō Production (literally, Full-Stomach Entertainment Production) agency's Eikyū Shōnen (Eternal Boys), a group of men who are around 40. They strive to become idols and overcome such barriers as their age and physical condition.

Suppose a Kid From the Last Dungeon Boonies Moved to a Starter Town director migmi is helming the anime at LIDEN FILMS, and Kimiko Ueno (The Royal Tutor, Uchitama?! Have you seen my Tama? ) is overseeing the series scripts. The original story concept is credited to the real-life "Manpuku Geinō Production," which is actually LIDEN FILMS, Fuji TV, and Polygon Pictures. Seiko Asai is adapting the original character designs by ma2 for animation.

Ryō Tanaka is directing the sound and Yukari Hashimoto (Mr. Osomatsu, Komi Can't Communicate) is composing the music. King Records is handling the theme songs, and coly is developing the spinoff novel game.

The manga adaptation began serializing Kadokawa's Comic Gene magazine on April 15, and the Human Academy Performing Arts College is collaborating with the project.