The 215th chapter of ONE and Yūsuke Murata's One-Punch Man manga revealed on Thursday that the manga's anime adaptation will have a third season. Chikashi Kubota, the character designer for the anime's first and second seasons, drew the below teaser visual for the third season. 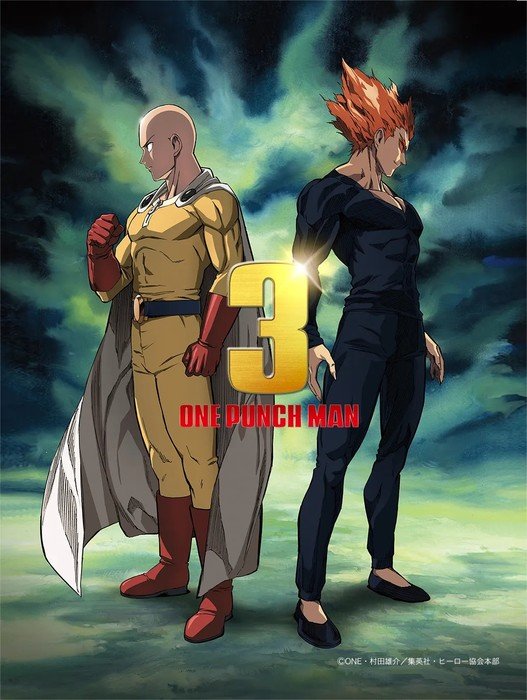 Yūsuke Murata and ONE launched the One-Punch Man manga on Shueisha's free "Tonari no Young Jump" website in 2012. The series is a remake of ONE's original web manga of the same name. Viz Media is releasing the series digitally in its Weekly Shonen Jump manga anthology, and is also releasing the series in print.

Viz Media describes the story of the manga's first volume:

Every time a promising villain appears, Saitama beats the snot out of 'em with one punch! Can he finally find an opponent who can go toe-to-toe with him and give his life some meaning? Or is he doomed to a life of superpowered boredom?

The first anime season aired in Japan from October to December 2015. Viz Media and Daisuki both streamed the series outside of Japan as it aired. The anime premiered with an English dub on Adult Swim's Toonami block in July 2016. Viz Media released the first season on home video in North America.

The second season began with a television special in April 2019, then the first episode premiered one week later. Viz Media acquired the master license to the second anime season, including digital streaming, TV broadcast, electronic sell-through, home media, and merchandising rights for North America, Latin America, and Oceania. The company streamed the show as a Hulu exclusive. Crunchyroll streamed the series in Europe, excluding French- and German-speaking Europe, and in the Middle ast and North Africa.

The entertainment industry news website Deadline reported in June that that Sony Pictures is setting up Justin Lin to direct a live-action film adaptation of the manga.