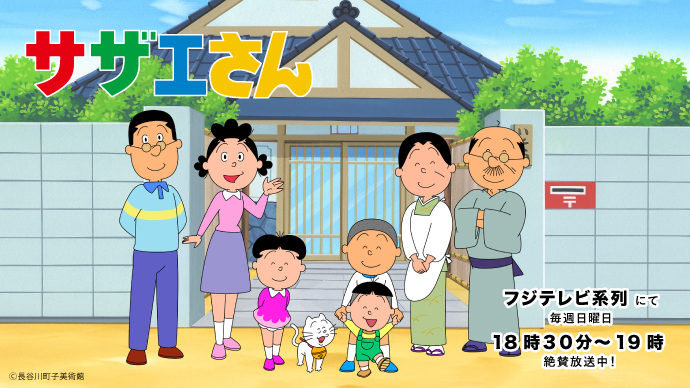 Sazae-san, the longest running animated television series in the world, will gain new broadcast sponsors in April following the exit of Toshiba Corporation, which has sponsored the series for almost 49 years. Toshiba was the sole sponsor of the series since from 1969 until 1999 but has been sharing sponsorship with other companies since then.

On Wednesday, Japanese news media reported that automotive manufacturer Nissan Motor Corporation will take over primary sponsorship of the series. Broadcaster Fuji Television had been searching for new sponsors for Sazae-san after Toshiba announced in November that it was planning to end its sponsorship as early as March 2018. Approximately ten companies are expected to become sponsors beginning in April.

The Kyodo News agency also reported on Tuesday that Internet retailer Amazon Japan, baby and maternity goods retailer Nishimatsuya, and construction company Daiwa House are among the new sponsors selected in a bidding process held by Fuji Television. Controversial plastic surgeon Katsuya Takasu, who expressed interest in having his Takasu Clinic chain sponsor the series, tweeted on Tuesday stating that his company has lost its bid.

Toshiba's decision to end its sponsorship of Sazae-san came as management struggles to keep the company afloat after experiencing huge cost overruns in its U.S.-based nuclear power subsidiary. In abandoning its nuclear power plant projects, Toshiba reported a US$3.4 billion corporate-wide loss in February 2017. The company has been attempting to stabilize its balance sheets by selling off a number of business units.