The relationship between Izuku Midoriya and Katsuki Bakugo is at the center of My Hero Academia, despite how deeply dysfunctional it is. The two are said to be childhood "friends," but it feels strange to refer to them as such without quotation marks, considering how their relationship much more closely resembles a classic case of bullying. Izuku has always looked up to Bakugo, but at some point, it seems like even Izuku would have given up trying to talk to someone who treats him as cruelly as Bakugo does.

Even though Izuku has been inspired by Ochaco's interpretation of the name "Deku," the nickname still originates as a cruel taunt thought up by Bakugo. Roughly translated, the word can be interpreted to mean "useless," which perfectly encapsulates how Bakugo has always felt about his childhood "friend." While the two boys are said to have been actual friends when they were very young, everything changed when Bakugo developed a Quirk while Izuku did not. 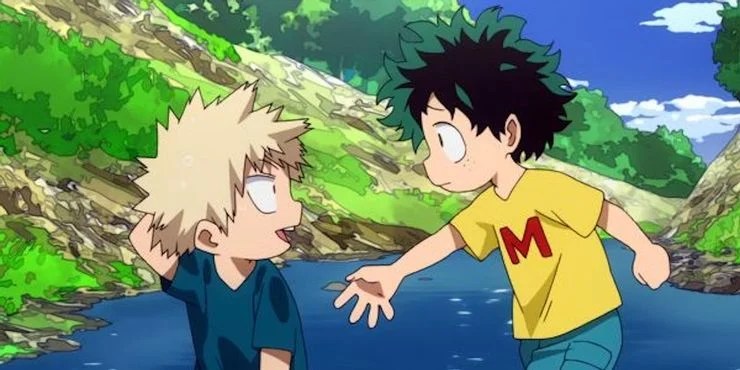 For some reason, once Bakugo developed his powerful Quirk, he stopped wanting to be friends with the Quirk-less Izuku, who still clung to him. When the two have their fight at U.A., Bakugo admits that he couldn't get Deku to leave him alone, no matter how hard he tried. Friendship is a two-way street, and Izuku seems to have always been blind to the fact that Bakugo wants nothing to do with him.

Always seeing the good in people might be part of what makes Deku a great aspiring hero, but the abuse he endures from Bakugo is beyond what most people would tolerate from someone they once considered a friend. Bakugo would take every opportunity to berate and belittle Izuku over the slightest failures. From skipping rocks to bouncing balls, if Izuku made a mistake, Bakugo was there to laugh and taunt him about it. There were even times that Bakugo and other Quirk-wielding children would gang up on and attack Izuku.

As time passes at U.A., Bakugo ever so slightly lets up on his harassment -- or at least, he no longer burns Izuku's belongings out of spite. However, Bakugo (very slowly) changing his ways hardly makes up for years of actual abuse toward Izuku that probably has just as much to do with Izuku's past insecurity as his Quirklessness. Still, Izuku doesn't give up on anything; even when he makes genuine friends like Iida and Ochaco, he doesn't let go of the notion that he and Bakugo can be friends again one day. It's just strange that he even wants to.

With such constant verbal and physical abuse during a child's formative years, on top of being Quirkless in a superhero society, it's a wonder that Deku isn't a supervillain himself. Bakugo is on the path to redemption, but whether he deserves to be redeemed for the way he's treated Izuku is debatable. It's to Izuku's credit that he didn't break from Bakugo's bullying and still wants to be friends again, but he's a better man than most in that regard.