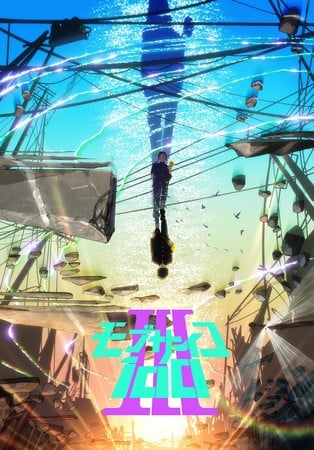 The anime will premiere on October 5 on Tokyo MX and BS Fuji and on October 7 on Cartoon Network in Japan.

Crunchyroll will stream the anime worldwide excluding Asia in Japanese with English subtitles and with an English dub as it airs in Japan. The first two episodes screened during the Crunchyroll Expo convention last month.

Crunchyroll is recasting the characters in the anime's third season. A spokesperson for Crunchyroll said the choice was made to record the simuldub for Mob Psycho 100 III at the company's Dallas production studio and in order to "accomplish this seamlessly per our production and casting guidelines, we will need to recast some roles." Bang Zoom! Entertainment produced the dubs for the previous two seasons of Mob Psycho 100. The majority of the dub actors in the previous two seasons are not based in Texas.

Voice actor Kyle McCarley revealed in a video on Tuesday that he may not return as the anime's protagonist Mob because Crunchyroll is not complying with his request that the company meet with Screen Actors Guild - American Federation of Television and Radio Artists (SAG-AFTRA) union representatives to negotiate a potential contract on future productions.