The fans of ‘Mo Dao Zu Shi’ are extremely hyped up and excited to find out that the animated series will be receiving a third season this year itself. As we already know, ‘Mo Dao Zu Shi’ directly translates to ‘Grandmaster of Demonic Cultivation’ and has been based on a Mandarin novel series, of the same title, which was written by the great Mo Xiang Tong Xiu. The first season of this Donghua series was aired on the 9th of July, 2018. Titled “Qian Chen Pian”, the season ran for fifteen episodes. The second season of ‘Mo Dao Zu Shi’ was aired on the 3rd of August, 2019. Titled “Xian Yun Pian”, the season ran for a mere eight episodes. A separate chibi series based on ‘Mo Dao Zu Shi’ also started airing on the 31st of July in 2020 and is scheduled to run for thirty episodes. Titled “The Untamed”, a live-action Chinese drama series based on ‘Mo Dao Zu Shi’, was also released on the 27th of July, which ran for fifty episodes.

Moreover, a third and final season of the main Donghua series has been announced to get released this year. A trailer of the third season was released on YouTube on the 22nd of January. Just like the first two seasons, the third season will be produced by ‘Tencent Penguin Pictures’ and ‘B.C May Pictures’, as well. Being directed by the skillful Xiong Ke, the crew of the ‘Mo Dao Zu Shi’ animated series is made up of talented artists such as Sun Yujing, Wen Teng, and Kun Shuo, who have composed the official soundtrack of the animated television and web series, as well as designed the animated characters. The third season of ‘Mo Dao Zu Shi’ will be broadcasted worldwide on various television channels. A large number of online platforms and websites will be streaming the upcoming season of this Anime television and web series, as well.

The ‘Mo Dao Zu Shi’ series is two stories woven together. The first is the story of Wei Ying’s death. The second is the story of his rebirth. Each story has distinct storylines and themes that are easy enough to analyze on their own, but due to the non-linear narrative, they are quite tightly entwined. The plot of the first story is about the legend of the Yiling Patriarch. The theme is about death, both figuratively and literally. There are other themes as well, but this is the most prominent one. The death of innocence, of sects, of parents, siblings, identity, hope. Everyone loses someone or something. Even Jin Guangyao loses the last bit of hope that he had for his father to respect and approve of him. It is the death of hope that sets him on the path of his eventual downfall. The story ends with the literal death of the Patriarch and the birth of the legend.

The plot of the second story is about a murder mystery. The theme is about rebirth and redemption. It starts with Wei Wuxian’s literal rebirth, which follows his slow redemption, as he pieces himself back together – just like the corpse that he is searching for. Lan Zhan is also looking for redemption to lessen the guilt that he has carried with him for so many years after Wei Wuxian’s death. Even Jiang Cheng gets a redemptive arc, while the viewers get to learn the great lengths he went to in order to protect his brother. Compared to the first story, there is surprisingly less number of deaths in the second, as this story focuses on what is gained rather than what is lost. The theme of rebirth is also prominent, most obviously due to Wei Wuxian, but also because of Nie Huaisang, whose figurative rebirth after the death of his brother took his character from meek and useless to a calculating, manipulative mastermind. 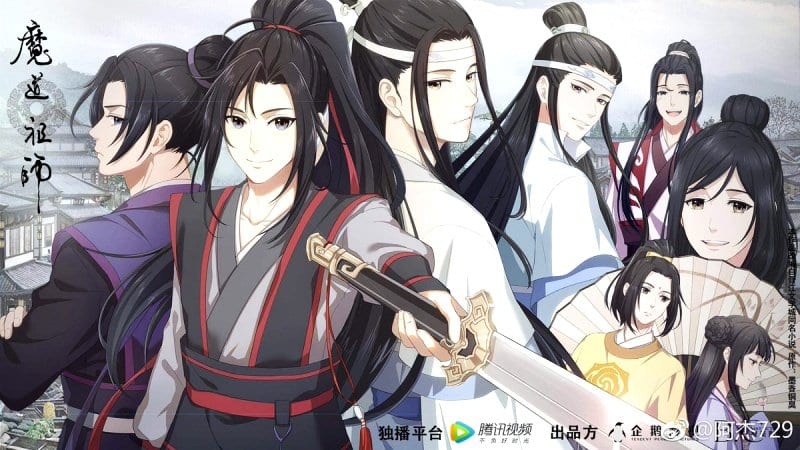 Mo Dao Zu Shi Season 3 will be available for you to watch on online platforms such as Anime-Planet once it gets released!